Worth its price in memories! 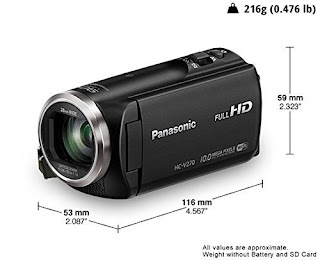 The product is stated to record up to 1080p videos at 50fps and 28 Mbps in either AVCHD or MP4/iFrame format. For my test, I selected the 1080p MP4 option and let the camera run through its battery. My findings are as follows:

Package and Weight:
Apart from the unit and battery, it comes with a 8GB card, carry case, charger, micro-HDMI and mini-USB cables. The unit alone tipped 213g on my weighing scale and with the battery and Memory Card, it went up to 258g.

Video Specification:
The continuously recorded video was split to 3.70 GB files of 22m 1s duration each. The container used is MPEG-4 Version 2. The video codec is AVC (High @ Level 4.2) whereas the audio codec is AAC (Low Complexity). The video bit rate was variable at 23.9 Mbps for one of the videos recorded in daylight which reduced to 14.4 Mbps as the sun set. The audio bit rate was 2-channel, 128 Kbps at 48 KHz.

Video Quality:
We enter subjective territory over here but I found the quality to be pretty decent in daylight, though not astounding. The performance deteriorates as daylight fades and hence it is not a good option for poorly lit areas, mainly due to the 1/5.8″ CMOS sensor. Having said that, the quality is more than enough for any home or vacation videos. You can of course move on to better options with bigger sensors, but those will cost you a pretty penny (certainly twice as much). The mic picks up the ambient sound well enough, thereby serving its purpose but the unit lacks any external mic interface to boost audio quality.

Zoom:
Definitely the USP of the product. The 50x optical zoom really allows you to read signboards at least a kilometer if not more away and that feels awesome. The sensor resolution at 2.51 MP is bigger than the 2.1 MP that Full HD Videos require and that allows you to zoom further in to an image without losing the resolution, accorded the moniker Intelligent Zoom or iZoom (up to 90x). It also has the useless digital zoom options of up to 3000x which are thankfully not mentioned on the product itself like the days of yore.

Image Stabilisation:
It has Hybrid OIS which combines conventional and in-camera stabilisation to offer stability across 5-axis (horizontal, vertical, axis of rotation, vertical rotation and horizontal rotation). It certainly seems to do its job, especially when zoomed in.

Still Image:
Inspite of the 10 MP still image line mentioned on the camera, the photos are frankly quite abysmal. Still cameras are still sold separately for a good reason.

Endurance:
The camcorder took about 140 – 150 minutes to eat up its 1940 mAh battery before switching off. It also takes a couple of hours to be fully charged up. Also, one can continue recording when charging which seems logical but warrants a mention since I had read about a competing Sony model which did not allow you to do so.

Storage:
The camera itself doesn’t come with any built in storage but supports SD/SDHC/SDXC cards. My 64 GB Samsung Evo+ works fine with this and indicates a total recording time of 5h 34m at 1080p.

Connectivity:
Quite surprisingly, the unit comes equipped with NFC and WiFi at this price point which is a definite plus. Set up was actually quite easy using the Panasonic Image Android app and a much better alternative that setting up manually. The inclusion of WiFi also results in the addition of features like Remote Shooting, Remote View, Baby Monitor and Real-time Broadcasting. WiFi is however only limited to 2.4 GHz, b/g/n standard and hence stuttering when viewing through the phone app is a common occurrence.

Screen:
It is a 2.7 inch (230,400 dots) touch screen. It must be resistive because it requires quite a hard touch to respond, but does its job.

Software Interface:
Won’t be winning any design awards for sure. Clunky, but you can find your way through. However, it makes using the manual mode a chore and perhaps a no-go option.

Conclusion:
It is a good Value for Money buy, especially when you compare it when competing units from Sony. It packs in a great zoom, WiFi connectivity and offers good image quality for its price. Image quality isn’t too great but if that alone is a concern for you, then you are better off spending twice the money on camcorders like V770 with a much larger (1/2.3 inch) sensor, though they don’t offer any significant feature upgrades other than external mic inputs.