Skip to content
A recent task I had to perform was to remove a list of item numbers from a document while keeping the item name intact. The syntax was <ITMxxx – Item Name> which was required to be changed to only <Item Name>. The task seemed straight forward up front but the tricky part was that the spacing around the hyphen was inconsistent and so was the usage of a dash instead of a hyphen. The various forms taken by this element were:

The idea was to replace all of them at one go while ensuring that nothing else was inadvertently replaced. Thus, the use of only the common wildcard character ‘?’ wouldn’t have sufficed. Fortunately, Word provides a very powerful set of wildcards detailed at the following link:
https://support.office.com/en-us/article/Replace-text-using-wildcards-5CDA8B1B-2FEB-45A6-AF0E-824173D3D6E4

To illustrate my case, the following strings in ‘Find What’ and ‘Replace With’ did the trick: 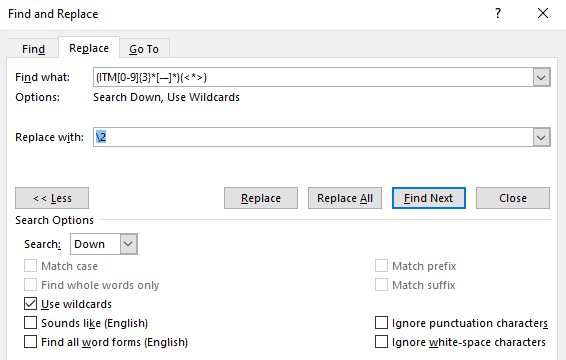 [0-9] captures the presence of any number while {3} ensures that the search is limited to 3 occurrences of these digits thereby capturing the ‘ITMxxx’ part.

The part *[-–]* captures the presence of space preceding or following the hyphen or dash.