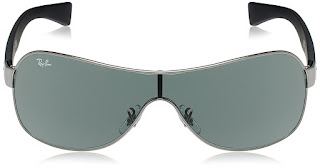 Beauty lies in the eyes of the beholder and the saying is never truer than when purchasing sunglasses. As far as I am concerned, there are only two parameters to consider – UV protection and design. On those fronts, this particular piece was a no-brainer for me.

The model in question, since the details seem to be missing on many sites selling it, is the 0RB3471 with the sub-model code 029/13 which happens to be the one with the brown gradient and gunmetal frame.
The box in which the glasses arrived in seemed to be a bit beaten. It could be due to the way it had been stored but I assume that it has been opened and tried/returned previously, though there is no way to tell that for the lenses seemed to be in good nick without a blemish. Also, the packaging is from November 2015, so I can’t imagine it having changed too many hands. Inside the box, the glasses were contained in a ginormous carrying case along with an information booklet (at least this thing comes from Italy, read below). Apart from the glasses, the case also contained a silver shaded micro fibre cloth.
To start off, I think there is a lot of apprehension about fake Ray Bans made in China as is evident by many one-star customer reviews across the web. The fact is that this one is made in China but by the official Luxottica Tristar factory in Guang Dong which has existed since 1997. Although the production between Italy and China may be distributed by model numbers, I find it highly unlikely that many of the models sold in India would be imported from anywhere else other than China. The import is done by Luxottica India situated in Gurgaon, Haryana. To quell any further doubts, a scan of the barcode present on the packaging identifies the product correctly.
Moving to the product itself, the UV protection is rated as 3N. As the accompanying booklet tells me, the number indicates the category of filter (protection against glare) and 3 stands for ‘High’ which ought to be good for general use, though not good enough for rowing, mountain-side vacations and driving cars (I may be kidding here but it seems logically true as you would need darker glasses to cut off intense glare). The letter indicates the type of filter and in this case it is N for Normal with other variations being Polarized (P) and Photochromatic (F) lenses. In case you missed it, it has 4 distinct Ray Ban engravings (one on the right lens, one each on the outside of either frames and another one on the inside of the right frame), not counting the 2 ‘RB’ engravings on the nose-pads. So, you can be absolutely sure of having purchased a Ray Ban.
The gradient is quite gradual and doesn’t in any way feel awkward, though you can experience it when you stare down and see through the clear part of the lens as against the coated part of it. As for the looks, I have always been looking for a style that wouldn’t expose the bridge and this happened to be the only one that caught by eye in the Ray Ban portfolio. As I said previously, if it looks good on you and offers the necessary protection, then it is an easy buy.
To conclude, I can’t a find a thing to complain about and so I would rate it a 5/5, especially since the price has gone up by a significant proportion (₹3697 to ₹5790) since my purchase. As long as the world looks good from your “sunglassy” eyes, there is no need for any teary sighs.