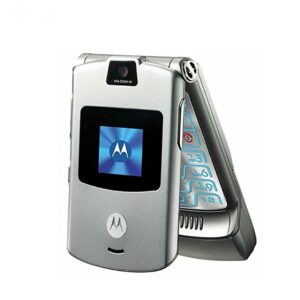 It was bound to be a day of unsubdued excitement, but instead it turned out to be one of abject disappointment. There is a time in everyone’s life when one aspires to something that is bound to be elusive. For me, that has been the case with flip phones. As a student in India in early 2000s, you had to pare down your expectations for a phone and a colour screen in itself was perhaps a defining feature. Against this backdrop, I was particularly elated at having been able to cajole the powers that be in to getting me the Samsung X100 which I considered to be superior to the C100 that occupied the palms of some of my friends. It also ushered in some of the best time I spent on the Web in collaborating internationally with other owners of the device in creating (or rather theming) custom ROMs for the device. May be that is a story for another time.
When checking reviews for mobiles in that era, there was no escaping the Moto Razr V3 as the aspirational device. There was never going to be an opportunity of ever grabbing one, but there was nothing to stop you from drooling over it either. The one that I did handle was the Nokia N76 which I must admit was something I would have liked to possess back in the day. However, as is the case with technology, the form factor happened to be a fad that passed away as rectangular slabs with big screens became ubiquitous. However, a part of me couldn’t let go of it for I must admit that I have checked for refurbished V3s on AliExpress and somehow withheld myself from making an impulsive purchase. At the same time, I couldn’t for some reason escape from the form factor as it happened to find a place in anime as well as in TV series from times gone by.
Hence, the recent Moto teaser featuring the Moto V3 filled me up with some excitement though not with total glee for I have been disappointed by the offerings from Samsung and Gionee in the recent past. As it happens, even that turned out to be a mere illusion. Till the next time, there is always hope and nostalgia.