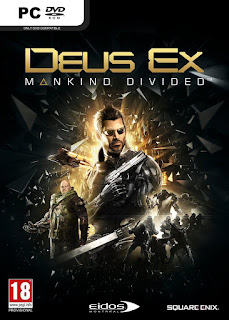 Being enamoured by the 2-level Deus Ex demo that came with a magazine disc back in 2000, there was no way I wasn’t going to pre-order Deus Ex: Mankind Divided. Having said that, this happens to be my first pre-order since I am accustomed to mostly purchasing games during the Steam sale. Going by my past experiences of Deus Ex games, I am pretty sure that I won’t be finishing this game anytime soon, so I thought I’d post a Day 1 preview instead to answer the queries of those inquisitive souls who are still on the fence regarding this purchase.

The box comes with a 3-DVD pack that considerably eases the download burden compared to a digital purchase. The installer launches Steam automatically if already installed and presents a custom ‘Product Activation’ prompt for the activation key. Note that the included code is for the RU/CIS/IN/BR version and should you wish, you can download the complete game from Steam (sizing up at 22.7 GB) instead of installing it from the disc. The installer itself just adds the game to your library and allocates the disc space, so you have to manually trigger the installation from the disc using the following command:

The DVD installer size shows the progress over 46333 MB even as the Steam downloader shows the progress over 22.7 GB, as it would if you are downloading the game directly from the web. However, it takes nearly an hour for the disc installation to be completed, demanding much patience. Even after the disc installation, there is a sizeable 3.8 GB download to bring it up to scratch (18.9/22.7 GB is completed by the discs).

The Day 1 edition comes with some additional goodies (Covert Agent Pack, Extra In-Game Mission – Desperate Measures, Digital OST Sampler and the Digital Books – Digital Comic Book, Digital Novella & Digital Artbook) which are installed from the disc. The pack and mission will of course be found in-game but the digital extras can be accessed at SteamsteamappscommonDeus Ex Mankind DividedExtras. All this content gets ticked off in the DLC section of the game in Steam. However, you should keep in mind that this is not a complete package as the Season Pass for this game is only digitally available for an additional Rs. 499 on Steam. This ‘Narrative DLC’ is stated to include 2 side missions – “System Rift” and “A Criminal Past” among other minor points, kits and packs. Only time will tell whether the DLC is going to be worth the money, though I feel that one is better off purchasing it during a sale. Additionally, 2 more release-day DLCs – Assault Pack and Tactical Pack, priced at Rs. 79 each, are not part of the Day 1 edition. Also, regretfully, Eidos decided to include a micro-transaction “Shop” within the game. Thankfully, the core game isn’t in any way compromised without the additional DLCs, so that’s a good thing.
The game also features an alternate game mode called Breach which was only publicized only in June. It gives the vibes of Tron, Superhot and Metal Gear Solid’s VR mode depending on how you interpret it, but considering that this additional content came about unexpectedly, there is absolutely nothing to complain about. From a fan’s standpoint, more the Deus Ex, the better (not counting the mess of a mobile port, The Fall).

The premise of the game is already well known by now with marketing terms such as “Mechanical apartheid” and “Augs lives matter” stirring up some controversy. However. any long time fan would already know that the game is all about the the choices you make and the stealthy approach. Unfortunately there has been some backlash over the PC port and at the time of this writing (Aug 24), Eidos has already released a patch (build 524.7) which addresses some of the issues. I have used Geforce Experience to optimise the settings and it has maxed out everything on my GTX 1060, so I have to see how it really goes over the duration of the entire game. There is also the controversy over the one-time use only Covert Agent Pack (since augmented with the term consumables) which wasn’t clarified prior to launch, so that is something to keep in mind when starting off with the game.
I guess that’s enough said for now as I am yet to delve deep in to the dystopia. More from me later once I save the world from its divided inhabitants. Till then, I ought to take care to not “spill my drink” while playing.

P.S.: Sorry for the blurry cam pics, but this is what excitement does to you. Also, the rating I have assigned is not a reflection of the actual gameplay experience at this time, so I hope to edit it later for the review.

Update #1 (Aug 29): I wasn’t able to start my campaign until today as the game simply crashed during the intro itself with Windows displaying a “low system memory” dialog box. It seems 8 GB of RAM is right on the limit and after installing an additional 8 GB of RAM, I could see the Windows RAM usage peaking to 9 GB. It is of course dependent on the level of details set in game and Windows’ background memory usage, but you can be sure that the game developers are serious about the minimum RAM requirement of 8 GB.