The budget smartphone segment has been pretty vibrant over the past few years and the stakes seem to be raised with every passing year. When I speak of budget, it becomes essential to specify a range because even ₹6000 (~$100) phones can pass of as one and still be quite respectable. However, in my case, I am looking at phones in the ₹10000 – 12000 (~$150-200) range since this is the sweet spot offering much of the flagship performance from a year back at 1/3rd the price.

When mentioning this segment, one simply can’t help but go back to the time when Moto G was first released. It was nothing revolutionary but it indicated that a great experience can be had at a much lower price range. Hence, it is ironic that my quest to find a new phone in this range was instigated by issues with a Moto G (2nd gen) that my Dad has been using for close to 2 years now. Having mentioned my Dad, one can quickly infer that the requirements didn’t at all reflect those of a power user and was chiefly driven by battery life.

This brought me to a shortlist consisting of the Meizu M3 Note, Redmi Note 3 and Le 2 (Honor 5C was an outside contender but lost out for not having a fingerprint sensor) . When you look at this group, you can quickly judge how fast phones in this segment have evolved. You are getting top notch (or near it) aluminium construction with 1080p panels. This makes the competition between these really close. The Meizu M3 Note quickly loses out on the processor front, although it might be stated to have the best construction. Le 2 on the other hand was a close competitor, but having checked out the Le 1, I can safely state LeEco’s EUI is far from well developed and stable, certainly compared to MIUI. Also, it loses out on the battery front with its smaller battery. Hence, I settled on the Redmi Note 3 (16 GB storage with 2 GB RAM…cause it’s my Dad using it).

To begin with the construction, it is quite astounding that one can accommodate it at this price point. One might say it is a straight off rip-off from a fruit company and they wouldn’t be wrong. There is no intent to hide this “inspiration” even as far as the packaging is concerned (or the website design for that matter). But nonetheless, buyers can’t complain much for what they are getting. The heft and width isn’t too much (at least lighter than my OPO with a bamboo back) and certainly worth it considering the battery size. The phone comes with a dual slot SIM tray – one supports a Micro SIM while the other takes in either a nano SIM or a SD card. 4G with VoLTE is supported on both the SIM cards.

Few gripes that I have with the body are:
1. The fingerprint sensor that the back might sound logical but it is prime for activation when putting the phone back in the pocket. I guess Apple/Samsung thought this out well.
2. The placement of the Volume and Power buttons on the same side means you can’t solely operate on feel, at least not till you develop muscle memory.
3. The asymmetrical placement of all the ports and microphones is a pedant’s nightmare.

The screen is far from being top notch and that is instantly recognizable when looking at a black screen with all the backlight bleeding. But still, a Full HD screen is certainly a “great-to-have”. Also, it is slightly wider compared to my OnePlus One of the same size and personally I prefer it as such since the edges of the screen are much easily reachable compared to my OPO.

The fingerprint sensor is a godsent for my Dad who struggled immensely with unlocking the phone using a passcode. Having said that, it is far from flawless. I had registered my own fingerprint as a backup and after a week of not touching it, I found that it failed to recognize mine. I can’t say for sure whether it was just a software bug or whether the sensor is a bit flaky, but you can’t compare it with the best. Also, it is slightly slow to unlock.

Coming to the OS, I would risk saying that MIUI is one of the more respectable skins. Perhaps, I am saying so out of nostalgia for I remember the times when I flashed MIUI 2/3 and CM 7 on my first Android phone, LG Optimus One. Again, the iOS “inspiration” is all over MIUI including, of course, the lack of an app drawer and all the skeuomorphism that Apple has since abandoned. It is strikingly out of place with the material design of 3rd party apps and certainly jarring, though I suppose there would be a theme to alleviate some of these concerns. However, in terms of performance, it doesn’t get bogged down and that is a huge plus. Also, the Redmi Note 3 is stated to officially receive the Marshmallow-based MIUI 8 (it comes with MIUI 7 based on 5.1.1 and MIUI updates don’t necessarily have a co-relation with the Android version updates). 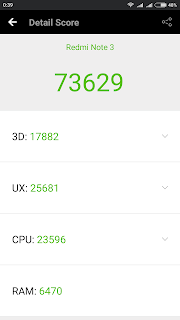 Speaking of performance, I decided to benchmark the Snapdragon 650 in the Redmi Note 3 with my now aging OnePlus One equipped with the Snapdragon 801. It is a somewhat fair comparison considering that the screen size and resolution are identical. Unsurprisingly, the Redmi Note 3 blows it out of the water to emphasize its VFM credentials. The hexa core setup seems the most pragmatic as the 2 A72 cores kick in only when the workload demands it and that saves battery life. I presume that it will lose to multi-core benchmarks to the Le 2 with 4 A72 cores but then that is besides the point. We have already ventured in to deca-core territory and the madness is not bound to end anytime soon.

To spare a few words for the camera, it is not going to challenge any phones priced upwards of $300, but it certainly much better than what you would get in the Le 2. To have phase detection autofocus with dual LED flash at this price point is in itself a headline worthy feature.

For me, the biggest draw of the phone is the battery life. There is simply no comparison amongst its immediate peers with its battery size of 4050 mAh. I wouldn’t go about a video looping/web surfing crusade to check the battery life, but I can say that it easily gives about 4 days of casual use with SOT (screen on time) heading to double-digit hours. Mana for Pokemon Go players, enough said!

On the flip side, there have been reports of  the phone overheating and this is evident when charging. However, it would be unfair to generalize it because the phone is never stressed enough to get hot over normal workloads. One can certainly push it when gaming or watching something encoded with HEVC and those with such use cases should perhaps check out the phone in person and see if they can live with it.
On the whole, the bottom line is that for the price it comes at, one can’t imagine opting for anything else.