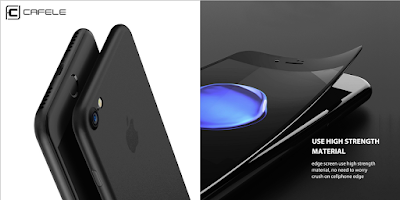 Lately, a lot of references to the iPhone have been creeping in to my posts. I guess that is bound to happen when it’s your first iPhone, lending itself to some experimentation. It undeniably costs a small fortune, especially in India and hence the need to protect it as an insurance against paying the immense Apple tax when it comes down to repairs. It is true that the IP67 protection of the iPhone 7 helps against environmental factors but it can do nothing to compensate for human stupidity and clumsiness.

I have already reviewed my first choice of “protectors”, the ones I had purchased along with the phone. I have already documented my disappointment with the Nilkin 2.5D tempered glass protector, though the Spigen case was more up to the task. However, the case’s protection comes at a cost, namely, it makes the phone a bit unwieldy to use with one hand. It also causes obstruction when typing characters on the edge of the keyboard and as I had already predicted in my review, it has already started yellowing at the edges.

This made me revisit the idea of how the phone ought to be protected. After a little bit of deliberation, I decided to look out for a minimal case that would provide grip and scratch protection. To account for screen-shattering human clumsiness, I decided to go for a full screen tempered glass protector. Even with this in mind, it is not easy to make a choice due to the plethora of options available for the iPhone. Instead of going with over-priced products that are re-sold in the local market, I purchased directly from AliExpress. My choice included the following:

1. Cafele Thin Case: My idea was to go with something like the Spigen Air case but it would be an understatement to mention that it is over-priced. The closest thing I could find on AliExpress is this case. Surprisingly, I received the product fairly quickly (within a fortnight) by AliExpress standards. The quality of the product too is quite good. In fact, I would go on to say that it has a better fit and design than the Spigen Air case being used by my brother on the iPhone 6. Initially, I didn’t like the rough matte feel of this case compared to the rubbery feel on the Spigen Air case, but it has been slowly growing on me. One thing to note is that the case isn’t as transparent/translucent as the pictures on the website would depict (I picked grey) and the Apple logo is barely visible.

2. G. D. Smith 3D tempered glass: Rather than browse around like I did for the case, I searched for this by name. To be more accurate, I searched by the name “Godosmith” since that was the one I had purchased a couple of years previously for my OnePlus One. Back then, it was more of a necessity since there were no tempered glasses available locally for the OPO. Having been satisfied by its performance (shattering at the edges after a couple of chair and floor hits but keeping the screen intact), I decided to go with it once again. The full screen protector was significantly easier to apply as I only needed to line it up with the home button and then lay it down. Getting rid of the air bubbles took a bit more time and effort since you have to do so using a thin gap present between the tempered glass and the ABS covering at the sides. However, after a few days things have settled down just fine though I will admit that the tempered glass isn’t as smooth as the iPhone’s glass surface and is more of a fingerprint magnet.

With this duo, my objective is complete. The iPhone now definitely looks like an iPhone and is a joy to use with a single hand while offering protection against most human calamities. I can’t imagine going back to “rugged” cases, but if you have a personal preference, then do share so in the comments.