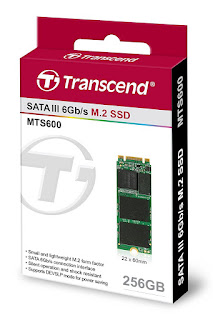 I had simply alluded to the Transcend MTS600 in my previous post on the M.2 SSD enclosure but this time the spotlight is firmly on it. The fact is that when I set about to update the SSD in my Dell Venue 11 Pro 7140, I realized that I wasn’t exactly going to be spoilt for choice. The only references to compatible M.2 SSDs in the 2260 form factor that I could find were the Crucial MX200 and the Transcend MTS600. Since only the latter was available locally, I didn’t even get the opportunity to decide.

The chief concern that I had was that the SSD was reported as not playing nice with Intel’s Link Power Management, though the forum posts were from a year or two back. I had also read a couple of posts referring to firmware updates that resolved this issue. The outer cover states that the SSD supports DevSlp and I am glad to report that I have been able to leave my SSD idle for hours at a stretch without encountering any BSOD. My SSD, manufactured in July 2016, came with firmware version O0918B which is the latest available at the time of this writing.

The total disc space on a fresh Windows installation comes out to be 238 GB. While increasing the storage capacity was the primary reason for the upgrade, I was really hoping that I would get a speed boost as well since the 64 GB SanDisk X110 was not one of the fastest SSDs around. While the SSD read speed didn’t quite touch the “up to 550 MBps” figure stated on the package for the 512 GB version, I am glad that it came pretty close and offers a significant boost across the board when compared to the default SanDisk X110 SSD. I rest my case with the following chart: 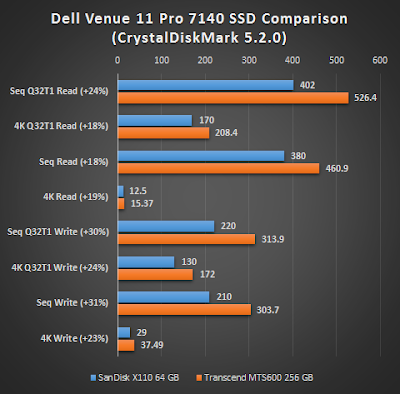 I was lucky enough to snag this locally for a price (INR 7700 or USD 110) comparable to the one on Amazon US (USD 107) as it has since appreciated by over 25% at the same store. Based on my personal experience, this SSD gets my wholehearted recommendation for the M.2 2260 form factor.