MWC is upon us and it is not hard to get excited by the latest and greatest. Except, that isn’t quite the case this time around. In the past, MWC provided the first glimpse of the next big thing through the unveiling of a plethora of flagship Android devices. However, it is not the case any more, not because my personal allegiance is to the iPhone, but because of the lack of the other big names in the Android space, most notably Samsung and to a small extent OnePlus. This left LG to hold the fort and while the G6 seems to be a really solid an practical device (more so compared to the G5), it isn’t going to set the stage alight with its specifications. Sony, on the other hand, managed quite the contrary by being on the top of the specification game but low on practicality. Of course, one can argue that the specs game no longer works and value is in the mid-segment with the Motorola G5s, so it is for the market to pass a judgment over the course of the year.

For me then, the focus of the show was Nokia. One may argue that HMD Global’s Nokia is that only in name, but it is the essence and principle of the brand that matters rather than its ownership. In that sense, it is good to have Nokia back rather than have the name obliterated in the consumer mobile space. Nokia too doesn’t seem to be playing the specs game with the Snapdragon 430, but the general uniformity of the specifications across the three devices (Nokia 3, 5, 6) must be a small price to pay for getting the “pure” Android experience along with the latest updates. Since I do not have the need for a flagship or a mid level device, the star of the show for me was the “one more thing”, the 3310.

Back in the day, I never owned one even though it was hard to miss its presence amongst one’s social circle. The legendary durability and battery life is what cast it in to a myth and it is nice to see that its reincarnation hasn’t strayed too far from that philosophy. A colour screen is pretty much needed in this day and age. I assume that in some markets the phone itself might outlast the connectivity since 2G (with EDGE) networks are slowly heading towards the sunset. It seems to be the perfect spoil to today’s smartphones, all of which possess a battery life measurable in 2-digit hours rather than days. Is there a need for this phone? I guess not. But would any Nokia fan want one? My guess is yes for the price it comes at. The perfect “life” phone that will help you survive the apocalypse.

Speaking of apocalypse, for the time being, it is another “Nokia” in my collection that holds the mantle for the highest battery life even at 9 years old. It is bruised, battered and compromised, but still twists and refuses to lie down. Nokia FTW! 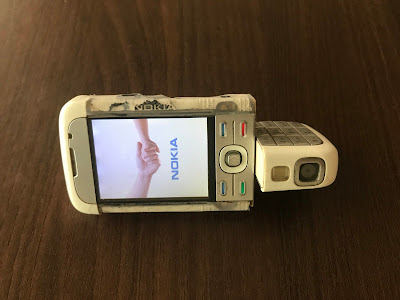