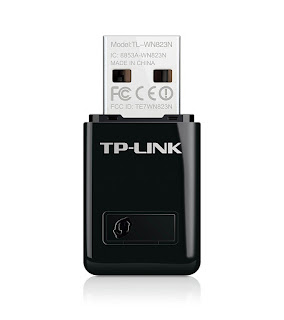 The Raspberry Pi is always a moving target in terms of projects as you may have read previously. The dumb Ethernet is sometimes the best option for the Pi as it doesn’t require any configuration at all. I preferred this option as well when the Pi was sitting close to my router and was interfaced with the PC monitor but its use as a media centre meant the proximity changed towards the living room TV. Samsung’s TV WiFi adapter proved useful in this regard as it had dual band support and was based on the common Realtek RTL8188 chipset which has wide support across Linux distributions. However, the TV gained its smartness after a long time as the Netflix, Amazon Prime Video and iPlayer apps were finally put to good use. This meant the search for a new USB WiFi adapter for the Pi.

The intention was to purchase the fastest budget adapter and the TP-Link TL-WN823N popped up at the top since it was priced lower than comparable N150 adapters. The one available on Amazon is the v2 variant with the RTL8192EU chipset. Initially, I simply replaced the Samsung adapter with this one when using OSMC and it worked fine. However, later on when I booted to Rapbian, it didn’t indicate the presence of a wireless interface. It was then that I realized that most of the information on the web about the compatibility of this adapter with Linux is based on the 3.x kernels and there is no out of the box support with any 4.x kernels.

It was easy enough to load the drivers on Raspbian using the information available on the Pi forums and it worked flawlessly. However, other distributions like LibreELEC or Lakka were a different ball game as they used different kernels. In case of LibreELEC, the 8192eu drivers are already present but don’t work with this adapter even after adding the device ID. In case of Ubuntu, there seem to be driver packages available but I haven’t tested the same. Even then, it will require patching with every kernel update and isn’t the “just works” solution that most would be looking for.

Thus, it seems best to stick with the well proven chipsets from the past. A N150 adapter is still faster than the 100 Mbps Ethernet port and much faster than the reading/writing speeds of most SD cards, so you are not giving up much. Sometimes, it is better to just take a step back to move forwards.