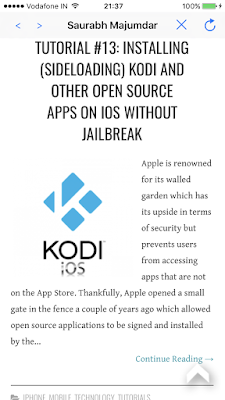 Even as I finished writing the last sentence of the previous post, I couldn’t resist taking up the challenge of creating the iOS app for the website as soon as possible. The result is my fastest follow-up post. I must admit that not unlike the Android app, I was only aiming at a WebView app that would utilize the current mobile responsive theme. More than anything else, it was about crossing another item off my bucket list.

However, the task was easier said than done. I had only installed XCode a few hours prior to try out what I have covered in my earlier post. While I settled for the Cydia Impactor approach for Kodi, creating the app meant firing up XCode, learning its basics, coding and then compiling the app in a matter of minutes. Hence, I was more than happy in churning out an app just a little later and having it running on my phone, even if it was ornamental more than anything else.

The last thing left to consider before publishing this post was deciding on the post title. The Android one lent itself very well to word play, but doing so with iOS wasn’t very practical. Hence, I decided to go with “Applified” which plays on Apple as well as the process of app creation. The app itself can be accessed from the ‘Download App’ section and installed using Cydia Impactor on a non-jailbroken device.