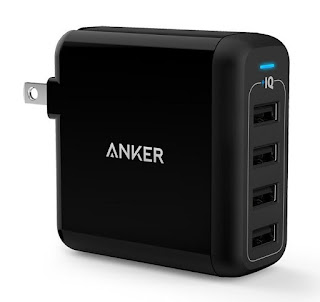 Anker is a name that I first came across over 5 years ago as the most recommended option for a replacement mobile battery. Since then the brand has extended its product range to even include vacuum cleaners though my purchases included only a 4-port USB Hub and a multi angle stand. A major issue has been the availability of their products in India, even through their official distributors Yugadi Electronics, forcing me to directly import it from the US. Hence, when I found the Powerport 4 selling at an effective price of Rs. 1620 on Amazon (1800 – 10% cashback) which is in fact lower than even the US price of $26, I immediately pounced on it with my only deliberation being whether to go with the white or black variant (eventually settled on the latter). In terms of choosing the right USB charger among Anker’s line-up, I feel that Powerport 4 is the optimal portable choice. The ones with the higher number of ports come with a USB power cable thereby affecting portability while the PowerPort 2 doesn’t seem to be quite as cost effective.

The outer box design is simplicity at its best and reminded me of the Chromecast packaging with its combination of white and blue. The minimalism extends to the contents of the box which includes nothing more than the charger itself and a couple of information leaflets. The first thing that you notice is that the charger has quite some heft to it. On my scale it comes in at 138g compared to 33g for the iPhone 7 charger. The weight is in a way an indicator of the quality of components and I can attest to it having used Anker products in the past. While none of the ports are certified for Qualcomm’s proprietary Quick Charging, they are instead labelled as Power IQ which is Anker’s microcontroller based solution for mimicking itself as the official charger for the device and thereby providing the optimal current requested by the device.

A problem that one faces when using US products is the presence of flat pins as against the round pin EU standard used in India. I always select flat pin compatible surge protectors or extension boxes but the wall sockets are another story. Among the 3 plug adapters I have with me, I found only one fitting snuggly with the flat pins of the charger. In case of others, the charger was left dangling dangerously on account of its weight and I had to resort to plugging in the charger upside down in order to prevent it from sliding out. The unit LED illuminates in blue with no load or when the charging current is within the USB 3 data standard of 500 mA. Anything above 500 mA and it changes to green which is in a way an indicator of quick charging.

The charger is rated at 40W at full load with 2.4A per port. With the normal USB DC voltage of 5V, it means that the device is capable of providing a total output current of 8A across the 4 ports. With most tablets drawing around 2.4A and phones drawing around 2A, this means the charger should be able to charge all of them at full speed. I decided to test it individually for 3 devices and compare it with the performance of their respective chargers.

First comes the iPhone 7. Apple provides a charger with a very low amperage of 1A compared to other mobile devices and while the optimist would say it is to prevent battery decay, a pessimist might think it is Apple’s way of pushing people to buy an iPad charger which is listed as being compatible with all iPhones. Hence, it is a foregone conclusion that the Anker charger with its ability to supply up to 2.4A is going to be faster than the default charger, but by how much is to be seen. Unfortunately, Apple removed a lot of battery APIs in iOS 10 which makes it impossible to monitor the real-time current and hence I have decided to use time as a metric instead.

So, it turns out that on an average, the Anker charger is 28.4% faster than the default charger. Since the charging current tapers off as the voltage increases, the advantage of the Anker charger reduces as the battery percentage increases which is in fact visible as the LED changes from green to blue when the percentage hits 90%. Even then it offers susbstantial time saving.
The second device is a Redmi Note 3 that doesn’t support Qualcomm’s Fast Charging. The supplied charger is a 2A one. In this case I am checking the average charging current over a period of 5 minutes.

Again, it seems that around 60% charge, the charging profile demands around 1400 mA. Even then, th Anker charger is able to supply a bit extra though the difference is negligible.
Lastly, I had a go with the OnePlus One which is a Quick Charge 2.0 device.

Since the difference is so large, I am inclined to think that the OPO charger is on its death bed and hence the comparison doesn’t seem too valid. However, the charge current on the Anker is high enough to indicate that it is supplying what is demanded of it.

To conclude, empirical analysis indicates that the Anker charger is up to the task of charging any phone up to its full potential which makes it a welcome travel companion. On the other end, it is on the bulky side, weighing as much as a phone and tending to hang from the socket because of it. For its utility, the charger deserves a 5 out of 5.