It is that time of the year again when Apple provides its first peek at non-iPhone hardware and of course, the next version of iOS. As a first time iPhone user with the iPhone 7, this happens to be my first major OS update and hence I couldn’t resist trying out the first beta. A forewarning though – this release is absolutely deserving of the “beta” tag and there are bugs all over the place that should be enough of a deterrent to not use it as a daily driver.

1.  The first boot to the lock screen immediately gives a glimpse of the new design language. I prefer this translucent button look over the outlined circles in iOS 10 and the reversion to the signal bars is a welcome change. However, for some reason, I had Bluetooth enabled on my first boot, the first indication of a bug. 2. Diving straight in to one of the major changes in iOS 11 – the Control Centre. The full screen control centre, with its default setting, looks rather bland with all the empty space at the top. Moreover, some of the controls are counter intuitive. For example, the Bluetooth control cannot be used to switch it on but only gets activated when a device is connected and the volume control only affects media playback rather than the ringer volume, even when no media is present.

The benefits of 3D Touch has always been arguable, but here it expands the controls further. The ability to quickly toggle off mobile data is much welcome. The Control Centre is finally customizable, but it only impacts the bottom row of controls. If you want to go overboard with it, this is how it looks. Obviously, Apple has a lot of work to do here. 3. A focus on simplification – the iMessage shortcut bar. It is good riddance too as the previous interface was very poor for discovery. The shortcut bar appears by itself on the opening of an existing message even if it is not an iMessage. Recalling it with the keyboard open takes some effort as you have to make sure it is an iMessage and then click on the App Store icon. So, there are few things to be sorted here as well. 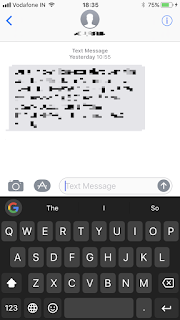 4. The dialler follows the new design language as well but with the backspace button at the bottom, next to the Call button. I think that is a more practical placement in terms of making correction to an entered number. 5. The new App Store design is interesting to say the least but it requires quite a lot of scrolling and has very little information density. Funnily enough, while Apple showcased the new Safari feature of blocking the annoying autoplay videos, it has embraced the same in the App Store. The second screenshot here is actually a gameplay video that auto plays on scrolling, though thankfully the video is muted by default, much like Steam. 6. The notification shade is now a replica of the lock screen. I would rather have it not hiding my notifications because that is precisely the reason I am swiping down. 7. I can seldom get Siri to understand my needs, but it was worth a try. Although Siri speaks “Chinese” and not Hindi, the point is moot for there is no support for translation from “Indian English”. 8. Apple hasn’t re-embraced skeuomorphism, but the calculator is a hark back to the days of old with its colour scheme.

9. Finally, the all new Files app. It is barely functional at the moment and doesn’t even find a place in the Settings menu, but a file manager is certainly welcome even if it is limited in functionality compared to other OS. 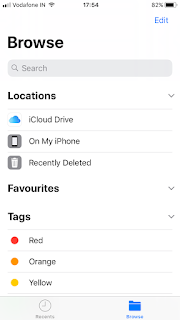 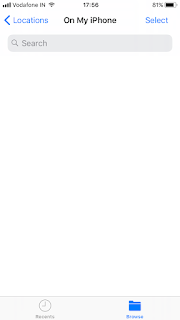 10. Lastly, the benefits of HEVC should be quite apparent, especially when shooting in high resolution. However, I went with shooting slo-mo at 720p/240 FPS and the resulting video on iOS 11 simply wouldn’t play back on any other device. Curiously, considering the same subject and settings, the video size for the 10-sec clip was higher at 61 MB on iOS 11, compared to 48 MB on iOS 10. I assume it is just another quirk since normal videos have been reported to be of half the size and playable with any H.265 compatible media player.