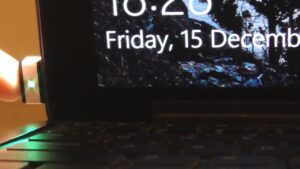 Biometrics has made device security really accessible, though it doesn’t alleviate security concerns as a whole due to the limited number of publicly viewable (and accessible) body parts that each one has at their disposal. Still, it managed to revolutionise the world of mobile phones and boundaries continue to be pushed with Apple’s Face ID and Samsung’s Iris recognition.

Unfortunately, in spite of being embracing biometrics a long time ago, PCs never incorporated it as an integral item. Hence, most mainstream laptops and tablets continue to be bereft of this time-saving functionality. To give credit where its due, Microsoft has at least done its bit to standardise biometrics support in Windows 10 through Windows Hello. Windows Hello does not require Trusted Platform Module (TPM) support but supports TPM 1.2 and 2.0. While it was unrealistic to expect manufacturers to embrace Intel’s RealSense cameras, Windows Hello has certainly led to a small uptick in the incorporation of fingerprint readers.

All of this does nothing for those who have already bought in to devices without biometrics support. This is where the PQI My Lockey comes in to the picture. In spite of wanting one, I never really had any realistic means of picking one up at a reasonable price until it was made available on AliExpress. I paid a little over $35 for it which is on par with the price at which it is listed on Amazon.com, though it seems to have been marked down to $30 for the year-end.

There are a few things that stand out about this device:
1. It is certified by FIDO (Fast IDentity Online) which ensures interoperability across platforms and systems.

2. It uses the Synaptics WBDI sensor which ensures good performance and support
3. Due its small form factor, it can be kept attached 24×7 to any laptop or tablet

On plugging the device, the first thing you notice is the appearance of the PQI Fingerprint Reader shortcut on the Desktop. However, this software is downloaded from the web, so the shortcut doesn’t appear unless you are connected to the web. It requires the .Net 3.5 runtime to run, but you might as well delete it since it doesn’t add anything of value to the experience. The drivers are installed automatically by Windows and the only benefit of using this software was that it kept track of which digits were being fingerprinted.

Instead, the more logical option would be to simply head over to ‘Sign-in options’ within Settings and add the fingerprint over there. Unlike the PQI software, Windows Hello prompts you to touch the reader at different angles which is much more helpful on practical usage. The setup using either options took a bit more time than I expected because I felt the reader was not picking up all the angles correctly, but it wasn’t too much of a bother. Also, it prompts you to enter a backup pin at the end which comes in handy when recognition fails. As a side note, you are best served with using a TPM 2.0 compatible device which offers much greater crypto agility and hence lessens the risk of the data being compromised. 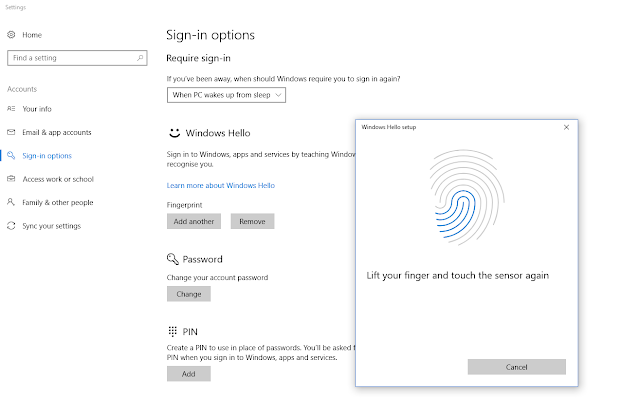 Once set up, the fingerprint reader is a breeze to use. It has a small LED on its front face that is normally off but switches on to a bright green on the lock screen or when you wake up your device. A successful read is indicated by a short blink before the LED switches off once again. Recognition failure is indicated with a double red LED blink and 3 consecutive fails require you to enter the PIN.

The highlight of this device is the access time of 0.15 seconds. It doesn’t feel as fast as the Touch ID on the iPhone 7, but that would be nit-picking for the sake of it. If you are really up to the task, you can measure the same using the video linked below. The other performance metric is accuracy. The marketing material again boasts of 360-degree detection but I would take that with a pinch of salt. The failure rate is a bit noticeable when you access the reader at different angles but even in the worst of cases it worked 4 out of 5 times.

To conclude, it always felt awkward to have to type in the password on my tablet after using my iPhone for most of the day. The PQI fingerprint reader saves the day at a reasonable cost. As a bonus, this thing also comes in handy plugged in to a USB hub on the desktop and auto logs in to different profiles based on the saved fingerprint. The occasional detection failure prevents me from rating it a 5/5, but frankly there is no better USB fingerprint reader present in the market at this moment in time. So, by all means, mark it down as an essential piece of hardware for Windows and add it to your tech shopping list.