Spectre and Meltdown have been all over the news in the past few days. While the seriousness of the bug cannot be understated, the speculation on the performance impact of the patch, especially on older processors, has been particularly worrisome. Google and Intel have put forth some assurances, but the end result is yet to be seen.

As my desktop is equipped with the generations-old i5-3470, I have to brace for whatever performance degradation comes with the patch. Unfortunately, with ASRock having released the last BIOS update for my motherboard in 2013, one can only hope to receive an official update. For the time being, the only option is to rely on Microsoft’s Windows 10 patch which only partially mitigates this issue.

Even then, it offers a first glimpse at the performance that has to be scarified in lieu of security. Intel has stated that the impact will vary based on the task and hence there is no easy way to determine the impact of the patch. I went with Cinebench R15 and CrystalDiskMark to quickly capture the impact on some everyday tasks.

As can be seen in the screenshot below, the performance impact seems to be quite significant with the post-patch score being nearly 7% lower. This is by all means a huge impact and cannot be disregarded. The CrystalDiskMark benchmarks were a little difficult to decipher. For the most part, it seemed that the impact was negligible. However, the few metrics that stand out are: 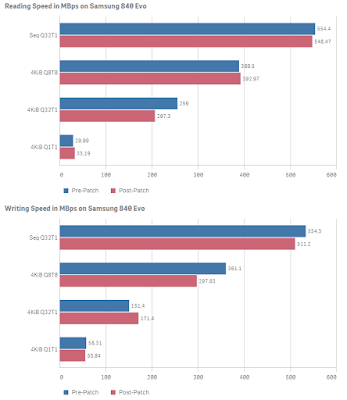 Intel’s statement of covering 90% of processor products introduced within past 5 years by the end of next week gives an indication that an update is imminent. While it would be best to have a BIOS update, it is possible to update the microcode at a software level from the OS which should at least address the issue at hand. However, how much more this would impact the performance, remains to be seen.

Update #1 (Jan 7, 2018): I ran the same battery of tests  under the same conditions on my Windows tablet powered by a Core M 5Y10 with a Transcend MTS600 SSD. The Broadwell architecture is two generations newer than my Ivy Bridge 3470 but at the same time, the 5Y10 is quite slower, so the tests should be a bit more interesting.

The post-patch Cinebench score is actually fractionally higher but is the same for all intents and purposes. So, it seems the ultimate CPU performance isn’t hampered. As for the SSD test, the only statistically significant difference can be found in the 4KiB Q32T1 tests, both for read and write. The performance degradation is in the range of 17-34% which is immense. It is consistent with the drop in read speeds for the Samsung 840 Evo with the i5-3470 but the drop in write speeds is simply horrific.

At least the Dell tablet is likely to get a proper BIOS update considering it has been well supported so far, so the post-BIOS update results should be quite interesting.

Update #2 (Jan 14, 2018): Intel released its first microcode update to address the Spectre and Meltdown bugs and it was disappointing to see my Ivy Bridge processor not being included. However, Dell released a BIOS update (A14) for my Dell Venue 7140 with the Core M 5Y10 processor, containing the latest microcode from Intel and I decided to flash it without further ado.

The results were frankly horrific. Immediately after rebooting, the system became immensely sluggish. The start menu failed to respond to my clicks, the icons on the desktop failed to refresh and Dropbox was unable to sync. I had no option then but to risk reverting to the previous BIOS (A13), but not before I ran the benchmarks to validate my experience.

While the Windows 10 patch didn’t much impact Cinebench, the BIOS update brought the performance down by over 6%.

However, worse was to follow when I ran CrystalDiskMark. The update has completely obliterated the single-thread read/write speeds for 4KiB block sizes with speeds falling by more than half. This made the tablet unusable more than anything else. For now, I have to stick with only the Windows 10 patch and hope Intel gets its act together further down the line. 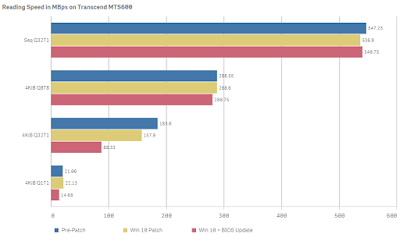 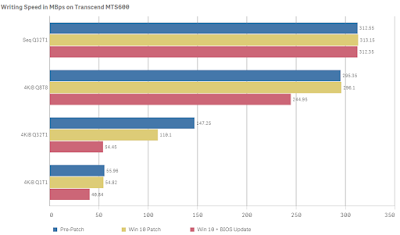 Update #3 (Jan 21, 2018): I finally bit the bullet and updated my iPhone 7 to iOS 11.2.2. Curiously, this update addresses the two Spectre variants but not Meltdown. Even then, it is simply a mitigation and not a patch. It seems to be more akin to the update released for Windows (even though it addressed Meltdown and one variant of Spectre) rather than the one by Intel. So, I wasn’t expecting the performance to drop substantially. That turned out to be true for the most part with most variances being in the region of 2-3%.

However, we might have not seen the end of it and subsequent updates might have more of an impact. We shall have to wait and see, but for now I leave you with the benchmark results, to be your own judge.

Update #4 (Mar 18, 2018): In the past week, Intel released microcode updates for Core processors going back to the 2nd generation (Sandy Bridge) which is commendable. With the support for the motherboard being long abandoned, I had no hesitance in flashing the latest microcode from Intel for my i5-3470.
After the horrors of the initial updates released in January, I am glad to announce that Intel has done a very good job this time around. As you can see in the image below, the performance with the latest microcode combined with the latest Windows patch is much better when compared to the scenario earlier this year and is very close to the unpatched performance. As a result, I would recommend everyone to flash the latest microcode without further adieu.

Update #5 (Mar 22, 2018): As an helpful anonymous commenter pointed out, the VMware method of updating the microcode doesn’t work as it is loaded too late in to the boot process. I wouldn’t have risked modding the BIOS of my H77 Pro4/MVP but thankfully, an helpful soul has already done the needful. To confirm, following is the result of  the Get-SpeculationControlSettings PowerShell script.

Unfortunately, the impact on performance is quite significant when compared to the original unpatched state. However, I guess I have to live with it for now as there is no other alternative and hope Intel has few optimisations lined up that will recover a bit more performance.

Update #6 (Mar 25, 2018): The performance of the 5Y10-powered Dell Venue 11 Pro 7140 has been sluggish since I updated to the latest BIOS (A15) a few days back. I finally got around to benchmarking it along with the recalled BIOS (A14) as well as the unpatched one (A13). The tests were carried out back-to-back under identical conditions, following the same procedure with the only variant being the BIOS. Hence, this is the best comparison yet of the performance impact of the microcode update.

As has been already pointed out in the comments with reference to this article, the Ivy Bridge processor (i5-3470) was especially impacted as it didn’t support INVPCID (invalidate PCID). Hence, there was some hope that the Broadwell 5Y10 would fare better. Unfortunately, that doesn’t quite seem to be the case. In percentage terms, the impact on the 5Y10 is much worse than i5-3470. Since this is a Y-series processor with a 4.5W TDP, the performance impact is much more visible in daily usage. Guess the time has come for this tablet to don a more sedentary role.