Update #2 (Dec 2021):
Finally got around to testing Comanche Gold on Windows 11 and the good news is that the original guide still works a treat, even though I have a different laptop now. The DXGL version at the time of this update was 0.5.19 with the same settings as mentioned previously.
Also, the switch to my own hosting has enabled me to include a direct download link, which should alleviate concerns of the Google Drive link going extinct.
Download

The game installs and works fine on the April 2018 Update of Windows 10 (Build 1803) with the same instructions. Things are now much easier as even the default settings on the current version of DXGL (0.5.13) work fine and Windows automatically prompts the installation of ‘DirectPlay’. I would still recommend using the ‘Aspect corrected stretch’ option as otherwise Windows changes the resolution rapidly and pops up a ‘fix blurry text’ prompt on first run. 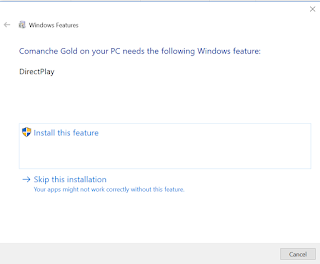 
There are those indescribable moments in life when you come across a relic from the past and are instantly flooded with fond memories. This was precisely the case when I stumbled across a mention of Comanche 3 on the web, one of the earliest PC games in my life that I spent countless hours on at a friend’s place (though candidly it was more of watching than playing, ala wingman to the PC occupier).

This meant I couldn’t resist the temptation of digging through my treasure trove for the Comanche Gold disc. Comanche Gold is essentially Comanche 3 for Windows with few extra missions and being 32-bit meant it could be run natively on current 64-bit PCs without the need for virtualisation. The geek in me couldn’t resist the challenge of getting it running once again on Windows 10/11 and hence this guide details out the steps to getting it done.

First things first, you need to have the following things on hand:

1. The Game Disc, of course, though I recommend creating an image of it for sheer convenience. The image can be directly mounted on Windows 10 as a DVD drive, can be archived and used on tablets that lack an optical drive.

2. Comanche Gold Patch Pack: I had come across various mentions of patches for Windows 7/8/10 but most of the links were long dead. However, the most recent mention of it can be found here. All credit is due to the original author(s) and contributor(s) of the patch. Since things tend to get lost with time, I have uploaded a copy of the patch to Google Drive. Also, with update #2, I have included a direct download link.

3. DXGL: This seems to be the real differentiator in getting the game to run properly on Windows 10/11 with the correct video mode. As of this writing, the version used was 0.5.11, though as of update #2, version 0.5.19 worked fine as well.

The ideal scenario would have been that I just install the game and replace the files with the patch as depicted in the forum post from SimHQ that I have linked to previously. However, that is not how it panned out for me and I had to engage in some trial and error to get the game working. Below are the fruits of my labour laid out in sequence.

a. Install the game to a simple directory structure (eg.: C:\Games\Comanche Gold) using the ‘Large Install’ option. Installation to the default ‘Program Files’ directory resulted in the game starting in the ‘Multiplayer only No-CD’ mode, despite the fact that the patch contains an exe that removes the CD verification.

b. Extract the contents of the Comanche Gold Patch Pack to the root game directory, overwriting files wherever necessary.

c. Install DXGL, add the Wc3.exe file and retain all the default settings. The only change I made was to change the Video mode to ‘Aspect corrected stretch’ but you can easily change this to ‘Stretch to screen’ in case you are not a fan of letter boxing. 4. At this stage, I still couldn’t get the Wc3.exe to launch as it only lead to a Windows error, none of which could be rectified using any of the compatibility options. Turns out the game needs the obscure ‘DirectPlay’ feature in Windows to be enabled, which is a long deprecated DirectX API. As it turned out, this was the last hoop I had to go through. Thereafter, the game launched in full screen mode and I was able to push the resolution to 1024*768, though 1280*1024 led the game to crash. Considering the age of the game, I would say it is an achievement to get it working perfectly two decades later. Love it or hate it, Windows compatibility and its legacy support is worth its weight in nostalgia, in spite of all the cruft.