The watch face has registered an average of 100 downloads a day since it was published, despite the fact that I have not publicised it anywhere else. It is simply through discovery on the Galaxy App Store and I am humbled by its popularity.

A smart life deserves a smartwatch, or perhaps it is smarter to be without one. Setting wisdom aside, I purchased my first one earlier this week – Samsung Gear Fit2 Pro. By being 1/3rd as expensive as a WiFi-only Series 3 Apple Watch, it won my wallet, if not my heart. I will reserve judgement on the device for the review, which isn’t likely to materialise until I have used it extensively.

This post, then, is about a watch face, to be precise, my first creation of it. Kudos to Samsung for making available an easy-to-use designer, utilising which I was able to create the watch face in hours and survive the royal wedding. Having not found what I was looking for, I decided to create one for myself. The focus in this case was on information density and making the most of the colours on the AMOLED display without straining the battery life excessively. 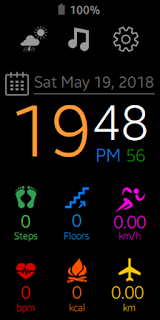 The result is a crowded watch face that includes all the details that I could wish for. Besides the inclusion of all the fitness information, the icons for weather, music, settings, calendar, step count, floors and heart rate are all tapable with the date redirecting to the ‘Today’ view.

I was also inclined to keep the display “always-on” and hence chose a minimalist approach for this scenario. It fulfils the purpose of telling time while making it possible to keep an eye on the ever-draining battery. As per the analysis available within the designer, the current on pixel ratio is 1.5% with the minimum being below 1%.

I will mostly publish this watch face in the Samsung Galaxy App Store in the coming week, so be on the lookout for that. On the other hand, if you have some suggestions for future watch faces, then don’t hesitate to leave a comment.

Update #1 (May 20, 2018): The higher than expected battery drain in the “always on” mode over the past few hours made me investigate the possibilities of reducing the power consumption while still retaining this mode. A little bit of digging brought up this article which indicates that the next best thing to black is green. Effecting this change for the “always on” mode produces the following result:

The maximum ‘Current on Pixel Ratio’ is now 1/3rd (there’s that ratio again!) of the original one. In fact due to the usage of green, this ratio now remains more or less constant and drops to 0.4% on certain occasions. Finally, I am not open to compromising the “Active” mode too much for power saving, but I have demoted the white to “seconds” which should help a bit. Update #2 (May 22, 2018): A few more tweaks and optimisations went in to the watch face over the past couple of days and I assume that it can’t get any denser than this. With the audience of one being satisfied, I have submitted the watch face to the ‘Samsung Galaxy Apps’ store and hope that it makes its way through to countless others. For now, I shall leave you with a cover image. Update #3 (May 24, 2018): The watch face has been approved and is now available on the Samsung Galaxy App store. As an homage to Boaty McBoatface, I have named it as McWatchFace, so you know how to find it. 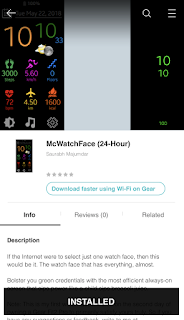 Update #4 (June 2, 2018): v1.0.2 was published earlier this week and it introduced the option of choosing the ‘Distance Unit’ besides squashing some bugs. I had started off with the intent of having a single watch face but a bug in Gear Watch Designer prevented me from implementing the 12/24H toggle. Moreover, since the toggle is dependent on the phone, it might be a good idea to have separate watch faces. I might revisit this idea later but for now I suppose I could move towards experimenting with the other features available in GWD.

Update #5 (June 10, 2018): v1.0.3 ushers in animation, starting with the weather icon. I have also published a YouTube video depicting the features of the watch face, as of this version.

Yours truly has also presented own self with a ‘signature edition’, remarkably named ‘MyWatchFace’. Unfortunately, there is no means for user customisation, so this one remains in my sole possession. Update #6 (June 12, 2018): Samsung seems to have a really inconsistent policy. While v1.0.3 of the 12-Hour version was published without any issues, the similar 24-hour variant was rejected for not supporting Chinese and Arabic.

So, to take the ridiculousness up a notch, I have submitted the same file once again as one can’t resolve an issue that doesn’t exist. May be I will catch a break and the watch face will pass through as-is or otherwise some minor tweak might be in order.

Update #7 (June 14, 2018): Unsurprisingly, the watch face was published as submitted and with that I have decided to bring the development of this watch face to an end. Hopefully, I will have time further down the line to create other unique watch faces, in which case they should eventually end up at the Galaxy App Store.