The release (or lack of it) of the Steam Link app caused a lot of brouhaha in the past month. While it it is meant for mobile devices, it undeniably adds a lot of value to the Fire TV and for that matter to all Android devices. It is a must-have that would have certainly made it to my list of  ‘The Essentials‘ were it available back then. It is not officially available on Amazon, so your best bet is to sideload it.

As I mentioned previously in my review of the AFTV3, the Ethernet adapter doesn’t make a whole lot of sense as it is limited to 100 Mbps. However, it would be more than enough in this case as Steam Link requires a maximum of 30 Mbps for streaming. Unfortunately, I had to rely on the 5 GHz WiFi network (Steam Link doesn’t support 2.4 GHz) with the TV being 25 metres away from the router, separated by a wall. This issue is compounded by the fact the 5 GHz receiver on the AFTV3 is exceptionally weak.

After playing with the settings, the only way I could get Steam Link working on the AFTV3 over such a long distance was by switching the 5 GHz channel bandwidth to 20 MHz. This significantly reduces the throughput but is a necessity for my current setup which I hope to change soon. Over the 20 MHz channel and at a distance of 25 metres, Steam Link works unimpeded in the ‘Balanced’ mode which uses 15 Mbps. I was even able to get the ‘Beautiful’ mode, requiring 30 Mbps, to work over the 20 MHz channel but it was inconsistent. On the other hand, it worked exceptionally well over the 40 MHz channel as can be seen below, but the AFTV3 was unable to sustain the signal over the distance, resulting in frequent disconnections. Nonetheless, this is an issue that can be easily resolved through some rearrangement. 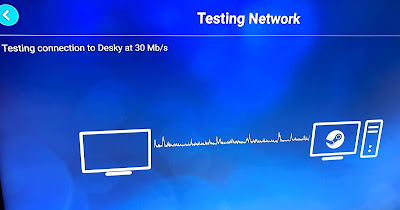 Steam makes it quite evident that the software is in beta and that AFTV is not officially tested. 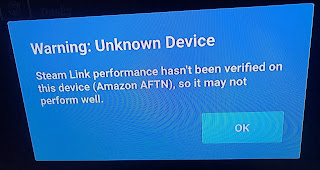 However, as long as the network is up to it, the AFTV is more than capable of streaming.

Inability of the network to stream properly is indicated with the frame loss and network variance.

Setting up Steam Link is extremely easy as it essentially requires pairing the TV with the host PC using a PIN.

Additionally, the Steam Client on PC requested the installation of additional audio drivers once the setup was done, but I presume this might depend on the setup. I had sold my Xiaomi Bluetooth controller a few months back so I didn’t have a controller to pair with Steam. However, I did have my Apple Wireless Keyboard and Logitech M557 paired to AFTV which ought to have done the job. While the keyboard worked fine with the Big Picture mode, v1.1.3 of Steam Link that I installed initially didn’t support the mouse which was subsequently rectified in v1.1.4, indicating that Valve is actively paying attention to user feedback. At present, the lag isn’t too bad, but the mouse controls are too sensitive which I presume is due to the fact that the tuning has been done as per analog controllers. It might make sense to pick up the Xbox One S or Steam controller for universal compatibility.
With the initial impression being quite good, one can only hope for Steam Link to work seamlessly once it comes out of beta. Perhaps the Steam Sale will become a lot more attractive for AFTV owners.