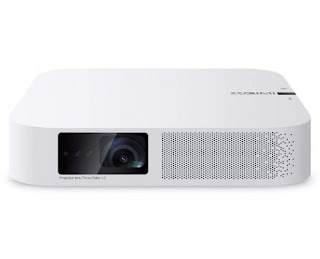 In my video review, I had stated the audio to be just about good enough, despite the Harman Kardon branding. In fact, I would still recommend getting an external speaker for the best experience. However, if that is not possible, then the wizardry mentioned subsequently will enable you to get the most out of the Z6 speakers. As it turns out, Xgimi has a hidden “Design Menu” within GMUI which can be accessed, at least in the case of Z6, by long-pressing the “right” direction key on the ‘System Information’ screen. The “hidden” menu pops up on the left as seen in the above image. At this point, I should make it clear that the ‘Audio’ settings that I am discussing is listed under ‘Non-standard options’, so there is no guarantee that it wouldn’t damage the device. Hence, caution is advised.

Within the ‘Audio’ menu, there is a “prescale” option that goes from ‘0x00’ to ‘0xff’ in Hex, or “00” to “255” if you prefer Base 10. My rather rusty knowledge of electronics from eons ago helps me recollect the use of a prescaler in a microcontroller to determine which oscillator pulse triggers an interrupt. How the prescale value specifically impacts the audio in this case is beyond me.

But impact the audio it does. The default value is set at ‘0x01’ and on changing it downwards, I could immediately perceive an increase in volume while incrementing it didn’t seem to have much of an impact. Thus, it was time to note down some observations. I changed the value to 2 levels from default in either direction and then to various quarter levels (25%, 50%, 75%) to gauge the impact.

If I don’t go by the values alone, then I would say ‘0xff’ seems the loudest, probably because it is also extremely harsh to listen to. Practically, ‘0x00’ and ‘0x7f’ are the best values for this option. They are nearly identical in volume, but I found the sound from ‘0x7f’ to be livelier, probably because it adds the right amount of “harshness” that becomes unbearable at the higher values.

It is miles away from the quality I get from the JBL Xtreme, but in terms of loudness, it makes the Z6 much more suitable for a small room.

My previous post on the Z6 alluded to the upcoming review but it was around that time I decided to embrace the video format over written words, not that you are spared reading, as the video is littered with text overlays.

It also provided me an opportunity to try out various non-linear editing systems (NLE) and I eventually settled on Lightworks. Considering it took me a few hours to come up with this output, I can’t recommend it enough, simply for its lack of a learning curve, though I expect mastery of it to take ages. The video itself is a farrago of poorly shot video, PowerPoint slides and images, so make of it what you may.

The down side to using the free version is that export is limited to 720p but I am sure you can live with that. With that (again), I will let the video to do the talking, especially as I haven’t done any.