Skip to content
With the purchase process detailed out previously, this post moves on to the products that constituted the buying experience. I had made a reference to Yeelight in the earlier post, though it was bereft of any specifics. Now, I can reveal the products to be the Yeelight Smart LED Bulb (Colour) and the Motion Sensor Rechargeable Nightlight.

Philips Hue has been the trendsetter in the category of wireless lighting for eons but it would be best to call it an aspirational piece of equipment after factoring in the cost of the setup also involving the Bridge. For anyone looking at wireless lighting with nothing more than inquisitiveness, there is no better option than the Yeelight Smart LED Bulb.

It gives a taste of what one can do with wireless lighting while providing the necessary support in terms of an app and ecosystem integration to better engage the right side of the brain. The first thing I noticed was the low rating of the app on the iOS App Store and I can attest to it being representative. Despite repetitive attempts wherein the bulb was detected, the setup always failed at 25%. With no other option, I decided to proceed with an Android device running MIUI and in this instance everything worked out smoothly. A point to note is that the bulb only connects to 2.4 GHz networks and isn’t terribly great at detecting it, so it is best to have it installed closer to a router than further away.

Once set up, I was able to connect and operate the bulb flawlessly. It takes all but a few seconds to connect to the device after switching on the power supply, which is a welcome life in the age of smart devices. The app itself offers several options to play around with the device. The presentation is similar on the Android and iOS apps. There are essentially 4 tabs offering:

i. Recommended presets like Night Mode, Home, Candle Flicker, Reading
ii. A sun preset with temperature controls going from warm to cool
iii. A colour palette to select any colour of choice supported by the bulb
iv. A flow mode that cycles through the colours at different speeds 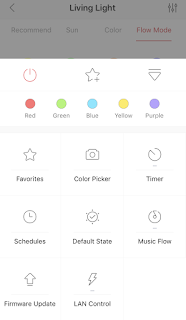 There is also a drawer offering additional options like setting up a schedule, timer or LAN control. There is also the option to update the firmware which I had to avail of the first time I connected the device to the Internet. The “Colour Picker” is a great way to sync the light to a colour you absolutely love though the accuracy as seen from the camera is questionable. The most interesting option here is the ‘Music Flow’ which “discos the light” in response to music. The only way it can do so is using the phone’s microphone since the bulb itself (thankfully) doesn’t come with one. I can’t say that the synchronicity of the lights with the music was all that astounding but it is a great party effect. Yeelight also offers integration with Google Assistant, Alexa, IFTTT and Siri. It was easy to add the device to Google Assistant but since I operate it in a limited mode on iOS, I couldn’t test it any further without providing blanket approval to tracking my Web and Search activity. I do have an Echo Dot at home but I have rarely used it since purchase, having never found it worthy of the data I was providing to it. Siri usage was more acceptable but due to the restrictions, it meant that the only activities I could control was the switching on and off of the light. None, of it matters though as I prefer using the app over any of the “lazier” options.

All said and done, this is still an IoT device that is going to be unfortunately widely accessible from the Internet. I don’t expect Yeelight to have done a good job of security but at least the most anyone can do is play around with the lights rather than access live feeds or toast the house. There is also the question of where the data is ending up, most probably, in some analytics or government controlled institution in China. Putting those concerns aside, it is certainly an affordable entry in to the world of wireless, colourful home lighting with a cost of less than $20.

There is something magical about seeing a light turn on by itself. That alone can be the reason for purchasing this light, but in my case it was more about ensuring illumination of the passage way at night for my parents.

The product boasts of impressive specs including a 120-day battery life with a 750 mAh battery and a 120 degree field of view with a distance detection of up to 7 metres. I didn’t go about measuring the angle or distance but I can attest to it exceeding my expectations, probably because I expected the specifications to be a bit of an exaggeration. Only time will tell how well the battery holds up but then charging over micro-USB for a couple of hours every quarter isn’t much of a bother.

The back side of the light comes integrated with a hook and a magnet, so those are the most accessible installation options. Thankfully, there is a magnetic plate with 3M adhesive provided, so the light can basically be installed just about anywhere. I chose to install it close to the floor, next to the bed and found the activation angle, distance as well as the illumination to be perfect for night time usage. To emphasise this point, the light comes with a light sensor to ensure that it doesn’t activate during day time or when a brighter light is switched on. If your expectation of a use case is anything different, then I would advise you to steer clear of it.

The light has three switch options – ‘On’, ‘Auto’ and ‘Off’. I would expect just about anyone to always keep the light in the ‘Auto’ mode as that is what it has been made for, with its motion and light detection. Unlike the Smart LED bulb, this one doesn’t connect wirelessly in any manner to any device, which is frankly a relief. At $15, I don’t think there is any other light available with this kind of feature set (apart from the cheaper variant of this light itself), so it is a recommendation from me if it suits your use case.