My review of the Xgimi Z6 Polar mentioned my disappointment with the in-built Harman Kardon speakers, especially when in pursuit of the home theatre experience. Since then, I was on the lookout for options that would fill this specific void.

It was natural to first consider a sound bar. Here, I was looking at two extremes in terms of (limited) budget as well as sound quality. At one end of the spectrum was the Mi Soundbar. For the price of INR 4999 (USD 70), one can’t go wrong, going by the spec sheet. However, it would be unfair to expect it to be anything apart from middling in terms of quality. At the other end of the budgetary spectrum, I was enamoured by the Yamaha YAS-108 selling for INR 18500 (USD 260). It would be my choice (along with the YAS-207, budget permitting), if I ever decide to go with a sound bar. However, an infrequently used projector setup and the awkward option of mounting a speaker below the projection screen led me to look for something more versatile…and portable.

Portability inevitably means switching focus to a category of speakers that one would casually term as “Bluetooth speakers”. To make it clear upfront, I have never been a fan of Bluetooth codecs and iffy connectivity, but sometimes it is worth the convenience. In this case, the concern is somewhat alleviated by the fact there is also an Aux-In input present in most cases, though one has to forego advanced digital connectivity options like S/PDIF and HDMI-ARC. It is human to want everything in everything even though compromise is imminent.

With this frame of mind, I headed over to Amazon and as it happened, a Bose banner occupied the front page. The Soundlink Mini II became the object of my focus on account of its stellar reviews. However, the age of the product, accentuated by its archaic Bluetooth version of 3.0, a pretty lowish battery life by today’s standard (10 hours) combined and a not-so-lowish price of INR 13000 (USD 183) stressed my little grey cells a bit more than I wished for. Also, keeping algorithmic trickery aside, there is no beating the quality constraints put forth by the physical dimensions of the product. This made me yearn for the Soundlink III, but unfortunately it isn’t sold locally and the other products from the Bose range didn’t fit my bill.

Venturing to other brands then, I came across my eventual purchase – the JBL Xtreme. In fact, it wasn’t so straightforward as I went through numerous other options from Harman Kardon (Onyx Studio), Ultimate Ears (Megaboom), Marshall (Kilburn) and Sony (XB41). The focus in most cases seemed to be on waterproofing (as a poolside speaker), raucous lighting and mega-bass, all of which I was not particularly attuned to. NFC is another feature that gets mentioned a lot, but I can’t see myself pairing devices to a speaker so frequently so as to necessitate its presence.

It was a review of the Soundlink III that led me to the JBL Xtreme as it was listed as an equivalent, if not a better option in the same price range. In case you are going by looks, then you wouldn’t find anything distinguishable about the Xtreme compared to its smaller and cheaper siblings – Flip and Charge. In fact, it would be completely wrong to form your opinion about a brand based on a product alone, especially a cheaper one. Sound quality doesn’t scale linearly with price and it is always a tight rope walk finding a balance between the two. In this case, I can only assure you that size does matter.

Even settling on the Xtreme wasn’t without further complications. Considering the price I mentioned previously for the Mini II, one can only imagine a Soundlink III to come close to the USD 300 mark in INR, if it was sold locally. This meant I was staring at the outer realms of my budget. Luckily, with the JBL Xtreme 2 picking up the mantle in this price category, the Xtreme was relegated to a lower price tier, though still commanding a price of INR 15000 (USD 211). This brought me to my second consideration – whether the price difference to the Xtreme 2 is worth it. From the reviews I read, the difference in sound quality between the two is largely imperceptible and the main draw for it, as you can guess, is waterproofing. Pfft.

Would I have spent even INR 15000 on the Xtreme? Possibly no. The real clincher was that I managed to get it for INR 10800 (USD 152). It was quite a matter of luck, patience and persistence. I happened to find a single unit of Xtreme listed separately on Flipkart at the aforementioned low price and correctly postulated it to be an open box item, considering it had a delivery time of 11 days as against 2 days for one listed at the normal price. Listing an open-box product as a new one is deceitful, but it worked in my favour as I was able to avail of the 10-day replacement policy, but not without considerable haggling.

I mentioned the word “portable” previously in relation to Bluetooth speakers. In the case of the Xtreme, I’d rather use the word mentioned on the box – “transportable”. It weighs over 2 kg, so calling it portable would be a stretch by any means. Conscious of this, JBL has thrown in a shoulder strap, though I suppose someone from the design team had a good laugh at it. However, having a multi-instrument, vocal Dholak hanging from the shoulder isn’t as ludicrous as it may seem.

All that heft must account for something and in the case of the Xtreme, it does so in the form of 2 x 65mm woofers, 2 x 35mm tweeters and two thumping passive radiators with a rated power of 2 x 20W (Bi-amp). With specs, comes power consumption and in the case of the Xtreme, JBL provided an ample 37Wh (10000 mAh at 3.7V) Lithium-Ion battery which is rated to be good enough for 15 hours. On my first complete run on battery, I got about 15h 25m over Auxiliary and 2h 15m over Bluetooth, totalling a run time of 17h 40m. Of course, the battery life depends a lot on the volume, content as well as Bluetooth usage, so my figures are simply empirical. The battery also works as a power bank and the Xtreme features two USB-A ports that can cumulatively output 2A (1x2A or 2x1A) in addition to the charging, aux-in and a service port. 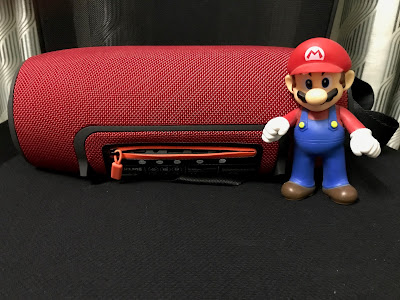 The Xtreme comes with a round-pin charger rated at 57W (19V 3A) which is an awful lot for a battery powered device. However, it ensures that the device gets fully charged within 3 hours (though the specs mention 3.5 hours). To my amusement, I found that the charger works with my Z6, so in effect I now have a charger redundancy, which is always appreciated, to a point. The battery life is indicated with the help of 5 LEDs on the front which is pretty vague and the device could have done with a battery percentage callout. Lastly, despite its age, it comes with Bluetooth 4.1 on board which is any time better than what’s onboard with the similarly old Soundlink Mini II.

Moving on to the most pertinent aspect of the device, the sound. The thing that hits you in the face (specifically the ears) on your first playback is the bass (along with the vigorously vibrating radiators). If your first track happens to be a vocal one like mine was, then you would be justified in harbouring some doubts. However, even with overpowering bass, the width of the soundstage becomes evident and it is able to reproduce sound pleasantly across the spectrum. The bass tends to eat in to the mids for tracks that have even a modicum of it, though the treble is unblemished. This helps it as a party (and home theatre) speaker but not as a music one.

Thankfully, pressing the ‘Bluetooth’ and ‘Volume -‘ buttons simultaneously for 10 seconds significantly flattens the frequency response and brings any vocal or instrumental track to life. What it actually does and why it isn’t documented in the manual is beyond me. There are 30 volume steps present on the device itself when used independently but it links up to the phone volume levels on pairing. The speaker is plenty loud to fill up any mid to large sized room, though oddly, the volume over Aux is significantly lower than over Bluetooth. There is no official mention of any other codec support and going by the fact that Android always defaults to SBC on selection of any other codec, it seems that’s the only supported codec. While I couldn’t bear SBC on cheap Bluetooth headphones in the past, the sheer quality of the speaker makes it less of an issue, and one can always switch to good old Aux. Lastly, there is the ‘JBL Connect’ button to pair up additional compatible JBL devices with the Xtreme but I find no use for it in a home setting.

The app support for this device is pretty barebone. The ‘JBL Music’ app on iOS simply lists the songs from Apple Music and mentions AirPlay support. The “AirPlay” option is nothing more than the native iOS selection of a Bluetooth receiver, so is of no practical use. Having said that, playback of the same track on Apple Music is much better than Spotify, though it is mostly due to the impact of transcoding from AAC compared to Ogg Vorbis. The ‘JBL Connect’ app is a tad more useful in the sense that it is supposed to provide firmware update notifications, though I didn’t get any and it is unlikely I ever will, considering the age of the product.

To conclude, if you can get the device for less than $160, then there is simply no better option available. Sound doesn’t degrade with age (of the speaker, unfortunately not of the listener), so it still holds up well against the $300 Xtreme 2 in terms of quality but beats it in terms of value for money. In short, for a discounted price, the Xtreme is highly recommended.