This is my first instance of writing a review of a product while using it to write the review. Having said so, this is the best experience I have had yet of the process of typing it out. Considering that I have been resigned to membrane keyboard until now and this happens to be my first mechanical keyboard, I would mostly like to recount my experience of using it rather than draw comparisons that I am ill-equipped to do. 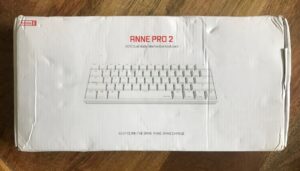 Disregarding the fact that I received the product in a beaten-up box, the item itself was well packaged and the accessories included a red-themed Type-C cable along with a keycap puller and blank CMYK PBT keycaps to allow for some customisation. A good package for a budget keyboard.

The first time around, the keyboard simply didn’t power up due to the orientation of the cable which was extremely odd considering it came with a Type-C cable. However, I am pleased to inform that the issue has since been resolved with a firmware update, which is one of the positives of having a smart keyboard. Another quirk I encountered, that still exists, is that the keyboard would work properly only with some and not all the USB 2.0 ports on my motherboard.

Considering the bugs I encountered with the shipped firmware, I would recommend making the software setup part of the initial keyboard setup. The Obinslab Starter software for Linux, Mac and Windows can be downloaded from here. The firmware section is divided in to 3 distinct sections – Application Processor, Light Processor and Bluetooth processor. Mine came shipped with v2.06 for the first two and v0.06 for the latter. At the time of writing, the last firmware update was released on May 20, 2019 whose versioning is at 2.09 for Application/Light Processor and 1.00 for the Bluetooth Processor. 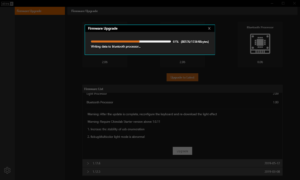 The first and foremost question about any mechanical keyboard is about the switches being used. Since I was looking specifically for a general-purpose keyboard, I had long decided to go with Brown switches rather than Red or Blue. The next logical question is about the brand and as ridiculous as it may sound, I decided to go with the default Gateron switches based on price alone. The preference for Cherry MX switches and its clones varies on an individual basis, so for my first mechanical keyboard, I chose to keep it simple, especially as I didn’t have the means of comparing them. For those inquisitive, the Kailh variant commanded a premium of a little over 10% while the Cherry MX were dearer by 25%.

The first thing that hits you on picking up the keyboard is its weight. It comes it at about 630g which feels comparable for a keyboard of this size. Prior to this, I was using the Apple Wireless Keyboard, so you can ascertain where I am coming from. That is another reason why the 60% layout didn’t come as much of a shock to me than would have been the case had I been using a full-layout keyboard. For the record, I was using a G105, a feeble attempt at getting a gaming keyboard, prior to switching to the Apple keyboard simply because it wouldn’t fit in my new keyboard tray. So, size mattered to me a lot in making the purchase decision.

Having said so, the keyboard doesn’t feel cramped by any means. I am not a professional typist, but my typing speed on 10fastfingers went up by about 10% on my first attempt compared to membrane keyboards. The beauty of the keyboard however is in its software which provides 3 levels of modifiers (FN1, FN2, TAP) to effectively quadruple the number of keys while being able to customise it in every conceivable manner. The keycaps are made from 1.2mm thick double-shot PBT plastic which is not meant to fade away with usage, but I will let time be a testament to that. 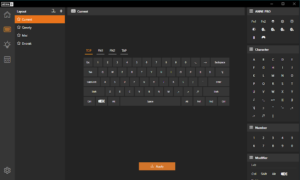 My idea behind getting this keyboard was to also be able to use it with the increasing range of devices capable of working with Bluetooth keyboards, ranging from mobiles to projectors. The Anne Pro II comes with Bluetooth 4.0 and supports pairing with 4 devices which is huge plus in my opinion. Pairing can be invoked by long-pressing the first 4 number keys along with FN2 while short-pressing the same key combo engages that specific pairing. I couldn’t find any means of exiting the pairing process prematurely which can be a bummer if you happen to engage it erroneously.

Thoughtfully, the Anne Pro II contains a Bluetooth switch on the back which should be useful in conserving the 1900 mAh battery that the keyboard comes with. However, even with the latest firmware, I encountered a bug where Windows failed to detect the keyboard in wired mode until the Bluetooth switch was turned off, which I hope is fixed in a future update. 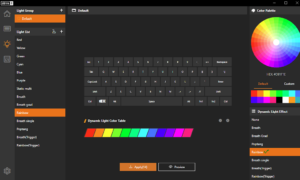 A major draw of the keyboard is its customisable backlighting. The keyboard features the following hardware combination to play with the lighting effects.

I found the Rainbow effect to be the most pleasing among the stock options, though further customisation can be done through the ‘Light’ section of Obinslab Starter.

I have already covered the ‘Firmware Upgrade’, ‘Layout’, ‘Light’ sections in earlier parts of the review which is where most of the action is. However, apart from those sections, you can also access ‘General Information’ about the keyboard and set up ‘Macros’ which can be extremely powerful depending on your use case.

The decision to get this keyboard would depend a lot on the price you can get it for. It is normally listed at $80 and at that price, it may not be as much value for money as you might expect it to be. I managed to snag it for $66 during an AliExpress sale and that price seems to be more befitting of the product. So, it might make sense to hold out for a sale whenever possible to make this more of a value purchase.

The Anne Pro II is an ideal beginner’s mechanical keyboard after factoring in the price, features and portability. Cheaper keyboards come with no-name brand switches while comparable ones come at a significant premium. If nothing else, the keyboard is pure value for money and preferable to purchasing portable, membrane-based Bluetooth keyboards.

P.S.: Till the time the default browser fonts start supporting the half-star, I have decided to improvise with the ‘Black Center White Star’ as a proxy for it.