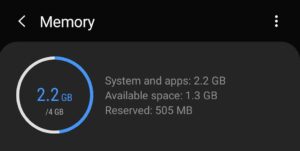 The demands from the hardware have arisen significantly with every passing year, which is only made worse by manufacturer-specific UIs adding an extra layer of cruft. While hardware capabilities increase demonstrably every year, the software demands more than negate the gains and ensure that even last year’s flagship is not a safe bet anymore. However, not everyone needs the latest flagship device or wants to spend a small fortune for the extra processing power.

As I touched upon previously, my primary reason for getting the A50 was the large OLED screen. With gaming on the mobile out of the picture, all I really wanted was to not have a horrible user experience which becomes part and parcel of any mid-range device over time. Mi devices are most offending in that respect with MIUI but Samsung hasn’t won itself any honors by bundling lots of promoted apps, some uninstallable, coupled with a Samsung Pay Mini card that interferes with the gesture system.

While adb commands offer a fair degree of control over the device, I prefer to root the device when possible to be able to customise it just that bit better with lesser hassles. The Samsung A50 has perhaps the unintended benefit of being able to boot into the rooted as well as the unrooted system at any point of time which kind of ensure the best of both worlds, if you are not looking to use rooted apps all the time.

With this, I present a step-by-step guide to setting up the device to run like it does when brand new, only better because of the uninstallation of all the bloatware. While it wouldn’t make any of games run any faster than what the hardware allows it to, what it does is ensure that the phone is running optimally at any point of time, so no memory-hogs or sudden slow-downs or battery-drains.

First the disclaimer. Rooting the A50 trips the Knox bit, so you are immediately foregoing device warranty as well as the ability to use any Knox-secured apps like Secure folder and Samsung Pass, though you can still run some Samsung apps like Pay Mini and Health.

For this, I will simply point you to John Wu’s excellent tutorial. It has worked with every firmware released till date and allows you to upgrade to every new release while retaining your data, the downside being that you will have to download the entire firmware to do so as OTAs are no-go.

Also, as I mentioned previously, the peculiar partitioning and button combination allows one to boot in to either the rooted or the unrooted system. I personally prefer optimising the system in root mode but don’t run it as daily driver as it has issues with WiFi disconnections and random reboots. However, the changes are carried over just fine to the unrooted system which is rock stable and has not rebooted randomly on me till date.

Island makes use of the ‘Android for Work’ feature to create a separate work profile for which it, and consequently you, are the admin. It can be made the device admin without root access provided you delete all other user accounts and make it the admin using adb commands. There is also the option of God Mode which essentially allows Island to control the Mainland apps.

However, Island by itself doesn’t have a background service and it utilises Greenify for that purpose, unsurprisingly from the same developer. While Greenify can normally hibernate apps using Android Doze, the integration with Island takes it to the next level.

The easiest way to ensure that apps undergo deep hibernation is to select the ‘Auto-freeze with Greenify’ option from within Island. This directly adds the app to the “Hibernation list” in Greenify with the ‘Deep Hibernation (by Island)’ option enabled. Alternately, one can manually add the app within Greenify and then select the same hibernation option.

Subsequent to selecting an app for Deep Hibernation within Island as mentioned in the previous step, it is a good idea to immediately select the ‘Create Unfreeze & Launch Shortcut’ option which does what it says. It allows you to directly launch the hibernated app but requires you to maintain the shortcut on the homescreen, iOS-style. 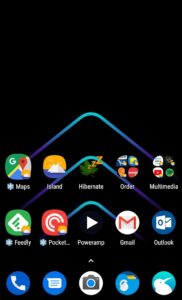 Lastly, I would suggest selecting the ‘Create Hibernation Shortcut’ from the Greenify menu. This places a “Hibernate” shortcut on the home screen, selecting which immediately freezes all the apps for which ‘Deep Hibernation (by Island)’ has been selected while also queuing up for normal hibernation any other apps you might have selected within Greenify.

The screenshot above indicates my app drawer post-hibernation and as you can see, the “all-time” enabled apps don’t even cover a single drawer page (the folders only contain about 4 apps each). At the end of the day, you really don’t need Maps or Uber running all the time in the background and tracking your location while draining the battery. Another illustration is the immediate memory consumption which in this example goes from 951 MB free to 1.2 GB free, just by hibernating the currently running apps. The interface fluidity and memory consumption is certainly much better by having only a limited number of running apps at any point of time. 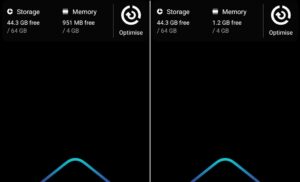 The other benefit is that you can run dual instances of nearly every app, independently within Mainland and Island. A tip over here – it is recommended to create a separate folder (or tab) within your launcher in which you can retain the Island apps that you wouldn’t like to be frozen like the duplicates of Play Store or VPN apps. It simply makes the launcher look cleaner and perhaps helps prevent confusion in case the padlock symbol against the Island app icons doesn’t work for you.

The only downside I have seen is that the apps don’t come up for update on the Play Store unless they are enabled, so be sure to check the Play Store for updates every now and then. Also, as I mentioned previously, the hibernated apps altogether disappear from the launcher and don’t reappear within the folder you might have assigned to them, as they are effectively seen as new apps by the launcher on every “unhibernation”, though the app data is retained. Hence, the recommendation to create the unfreeze shortcuts on the home screen.

There can be some paranoia over having an app become the device admin, especially coming from China. However, I have previously interacted with the app developer over email and have found him to be polite while immediately addressing the issues reported by me.

If you simply want the benefits of an independent work profile, you can use the Test DPC app which allows you full control over the work profile as an admin. You can also use the open-source equivalent of Island known as Shelter.

However, neither of the apps integrate with Greenify like Island and neither are able to create a work profile when the Knox bit is tripped. Hence, in my case, it is the only feasible option to keep rogue Android apps in check. In case you feel differently or have any queries, feel free to drop a comment below and I shall do my best to address the same.