Skip to content
I left my previous post in a bit of a cliff-hanger but then things have changed a lot since then. One would imagine being stuck at home would offer better opportunities to engage in one’s passion but quite the opposite turns out to be true. 2020 hasn’t been an easy ride and no one could have seen what’s coming, but that’s the story of life, our life.
To pick up from where I left off nearly 4 months ago, I did pick up an alternative in the week following my previous post and the choice is reflected in the title of the post. You might recollect that it was a balance between price and quality for me and in that essence, the Buds+ hit it out of the park, provided you pick it up at the right price.
While even the renewed Jabra Elite 75t was priced at 10.3k INR ($138), I picked up the brand-new Buds+ at 8.5k INR ($114) and it is now priced even lower at 8.2k INR ($110). Granted you will have to find the means to pick it up from Samsung’s corporate portal rather than the consumer one, but at that price, you can easily see why it makes a really compelling option. It is rare to have electronic items priced lower in India than in US, so it is good on Samsung to offer it at such a competitive price, albeit hidden from most consumers. 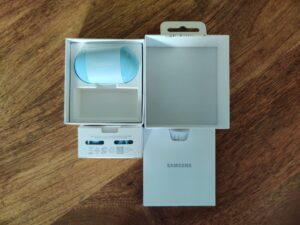 I picked up the blue variant simply on account of it not existing in the previous version. I am not particularly picky about colours, but this shade turns out to be quite “cool”. There are new colour variants being released all the time, so you may have a personal preference but at release, this one was the only option if you didn’t want to go with the non-colour black and white options.
The packaging is pretty standard by now for most true wireless earbuds but Samsung gets most of it right, starting with the USB Type-C support for the case. Speaking of the case, it is much smaller than what you might get with competitors and light at about 39g which was possible simply because Samsung managed to pack incredible battery life within the earbuds itself as against having multiple recharges provided by the case.
There are 3 sizes of tips provided along with hooks and a Type-C cable. I had to go with the largest tips eventually to get a good fit and passive isolation, but it gets the job done. It may support one of the Comply foam tips if you prefer those, but I couldn’t use my MA650 Wireless tips even though they were a much better fit, for the reason that the buds wouldn’t fit in the case with those attached. A real bummer! Apart from the tips, the wingtips offer the extension required to lock the buds in place. I can see this to be a godsend for some people but it never worked for me. I get a snug fit in my right ear and a loose one in my left which irritates me to no end, but I guess you can’t change your ears to suit devices and I wouldn’t like to know about it if it’s possible. Thankfully, the buds themselves are quite light at little over 6g as otherwise it would have been a hard time walking or running with them.
Going back to the point on battery life, the Buds+ boasts 11 hours of device battery life. That is a tall claim and one that I am inclined to believe based on anecdotal evidence as it is nigh impossible to have a 11-hour listening session. However, I went through a complete workday having the buds in ear or lying about and finished the day with 55% battery life with office calls and some music thrown in. The battery capacity figures are indicated above, and basic maths would indicate that the case offers a bit over a single charge, hence Samsung’s claims of 22 hours listening time in total.
The case itself has a multi-coloured charging indicator inside for the buds on the inside and the case on the outside which does a good job of indicating if the buds are being charged as well as the battery life of the case itself going from green to orange to red. Wireless charging support would also come in handy in case of emergencies if your phone happens to support the same which sadly isn’t the case for my 7T.
One thing that has been consistent is Samsung’s rate of updating the software which is good to see. The above screenshot on the left indicates the first update I downloaded straight out of the box and the second one indicates the latest update which happens to be the fourth one in 3 months since purchase, so a decent clip. A lot of the initial updates were focused on ambient noise and the latest ones have moved more towards stability. Even so, features have been added with time and the latest one is the seamless device connection, or at least the option to toggle it off which would come in handy when devices are fighting to take control over your buds, as is the case with Windows.
The “Labs” section is another one to access experimental features that Samsung feels is not ready for prime time. However, I found the edge double to be most useful, not for taping on the edge for volume control but rather the base of my ear and it works surprisingly well. The detection is done using the accelerometer, so it doesn’t matter how you activate it. This gives rise to the possibility that some people might activate it by sudden ear movements, but it has been pretty flawless and convenient for me.

Continuing with the app interface, the above image is of the main page of the app and it gives an overview of all the available settings. The most visible change has been to the battery indicator where I have observed the battery life indicator being switched from displaying the individual level to a combined one. It is obvious that both buds may not have the same life based on connectivity and usage, so the individual bud display was better in that sense but I am pretty sure that a lot of people would have complained about the asymmetrical battery life as being a device issue and hence now we are probably looking at lower of the two battery lives which limits information as far as single bud usage is concerned. Unlike the 75t which uses a master-slave (leader-follower?) combination, the Buds+ is capable of being used independently and hence it is odder still that Samsung moved to a combined battery life indicator.
Apart from that there is a simple 6 preset equaliser present and I would have instead preferred at least a 5-band equaliser that is provided by Jabra. This limits the tweaking ability and I would assume a lot of people would go for the Bass boost option because this set is far from being as bass heavy as the Jabra Elite 75t. The other options are unlikely to be used much apart from probably the Touchpad one.
One might have expected more customization from a section dedicated to the Touchpad but only the touch and hold option is customizable out of which ‘Ambient sound’ is a must-have. Rest of the controls are pretty intuitive and doesn’t take much time to getting used to. The Lock touchpad comes in handy when dozing off and I admit to making use of it a couple of times to good effect. Overall, having a capacitive touchpad is better than having to press physical buttons and +1 (see what I did there?) to Samsung for that.
I believe I have covered everything apart from the audio until now and a lot of people would chastise me for beating around the bush. However, sometimes it is best to keep the best for the last. To prevent any confusion, I am not talking about the audio being the best in its category but rather the best aspect of the device itself. It really holds up well for what it is. By that, I would like to clarify that it isn’t at the same level as the Jabra Elite 75t but close to it. It can’t punch bass to the same extent as the 75t and it has a smaller soundstage but otherwise the clarity is quite good. I am putting this in perspective of my use case which is using this on the move and in such instances, the higher audio quality doesn’t matter much as I would altogether put down wireless buds if I am to enjoy the audio. Also, Samsung has significantly improved the microphone quality from its previous iteration by including 3 sets of it and it also does a good job when using the ‘Ambient Noise’ feature which I believe is a must-have for any TWS earbuds. On the flip side, the microphones are too sensitive and pick up the ambience to a great extent which is a shame as the passive isolation from the earbuds is quite good and the wearer is oblivious to the noise others complain about, unless ‘Ambient Noise’ is enabled in calls and even then you cannot do anything about it rather than apologise to the listener.
To address the elephant in the room, the Buds+ don’t have any kind of aptX support. You will have to rely on AAC for most devices and that isn’t a great option for Android. While the audio quality is still decent, the latency is atrocious for apps that are not tuned to synchronise the video as per the latency. Also, Windows does not support AAC and it means falling back on SBC which makes things even worse. Samsung’s variable audio codec might be a good alternative to aptX but with it being limited to only Samsung devices, it isn’t going to be a smooth ride for those who wish to use the Buds+ for everything. However, my use cases mainly involve music and watching video on apps that are designed to synchronise the video with the audio, so it hasn’t been much of an issue. Also, while Spotify might sound poor with AAC and SBC, my music collection is mainly in FLAC and the AAC stream of it gets the job done when on the move.
To round it off, getting 90-95% of the performance of the 75t at just above 50% of the cost is too good to pass. You will lose the water and dust protection with the Buds+ only being classified as IPX2 and the audio quality is again a notch down from the 75t, but something that isn’t going to be an issue when on the move. The battery life is phenomenal, and the look, feel and fit are much better than the 75t. It boils down to your use case and if it is about having a great set of wireless buds on the move, then this fits the bill perfectly. If you are someone transfixed with audio quality and active noise cancellation, this one isn’t going to float your boat. But for the value conscious, there simply isn’t a better option from a reputed company that cares to update its device beyond the initial purchase.