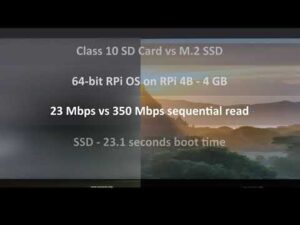 Earlier this year, I bid finally bid adieu to my Raspberry Pi 2 in favour of the Raspberry Pi 4B. The RPi 4B certainly opens up new horizons with its additional power, though I don’t suppose it is a desktop replacement as some marketing material would have you believe. I couldn’t care less about that aspect as it is meant to be more of a hobbyist product, though I did switch over to MATE desktop environment from the kiddish-looking LXDE environment that the Raspberry Pi OS comes with by default.

What I was looking for most is the general increase in performance and with the BCM2836 SoC in the Pi 2 v1.1 not supporting USB boot, this was the first time I could boot off the USB. I immediately jumped on to the 64-bit beta back in May along with the EEPROM update that allowed booting off a USB drive.

I already had a Sandisk X110 M.2 SSD with me from an older tablet and a M.2 to USB enclosure. Unfortunately, I quickly realised that the enclosure was not up to the task as even loading the boot files failed repeatedly. It seems the controller on a cheap enclosure isn’t really that good (who would have thought?), so it meant getting another one instead. I went with a ORICO one this time, not expecting it to be great but at least better than the one I had since it cost 3 times as much. Sure enough, it did the job.

So how fast is the SSD over the SD card? Unsurprisingly, it is quite significant. The lower power of the processor on the Pi gives a better idea of the difference made by SSD alone, though with it being limited to a shared 5 Gbps interface, the full extent wouldn’t be evident if you plug in another USB 3 device or wastefully plug in a NVMe SSD instead of a NGFF one.

Long story short, unless you need your Pi to occupy as much less space as possible, it makes sense to boot off a SSD instead of a SD card. Also, if you have a good case, like the Argon One I picked up recently, it is possible to overclock it to the maximum 2.147 GHz without voiding the warranty and still keep the temperatures lower than the stock frequency without cooling. All this does tempt me to give the Pi a go as a daily driver, but for now there are many other creative uses for the device that take precedence. Until next time, Godspeed!