My previous post about the A15 was about plucking the low hanging fruit of performance. However, there is always the scope of optimising the settings further to gain the greatest benefit for the lowest cost. That is what I was up to on and off since the last post and having reached a satisfactory result, I have decided to share the same for anyone trying to squeeze the little bit extra from this hardware.

The base concept is still the same, to get more out of the GPU at the expense of CPU within the permitted power and thermal budget. To that end, I went through the process as follows:
1. Reduced the CPU temperature and Normal/Short/Long TDP limits to 85 and 25/35/45 respectively in Ryzen controller to provide further headroom to the GPU.
2. Reset the MSI Afterburner settings to stock which had the following curve for my RTX2060.

3. Ran an actual game as I would like to play it (in this case Dishonored 2 at 2K Ultra with HBAO and Triple Buffer) and noted the Average and Maximum GPU frequencies attained in the middle of the game. 4. Few observations first. Neither the CPU or GPU are thermally throttled in any way. Instead, the GPU hits the power limit which in the case of the A15 is 90W. Note that the included GPU is the RTX 2060 Notebook Refresh and thus it is a 110W TGP part. This indicates that the laptop does have thermal capacity to spare, especially as I had conducted these test with an ambient temperature close to mid-30 degree Celsius. Having the option to push the GPU Power further would have been great but with that being an impossibility with a locked BIOS, the next step was to figure out how to extract the most from the hand I have been dealt with.

This concluded the stock performance analysis. Now, there might be multiple guides present that put forth different suggestions as to how you can proceed with undervolting or overclocking but I decided to use these figures to try to set a target that I wanted to attain. In this case, it was to try to push the stock sustained performance to the lowest voltage (i.e. 1560@700) and the peak stock performance to the sustained voltage (i.e. 1755@812). Doing so manually with a smooth curve was going to be quite a challenge, so I decided to take a bit of a shortcut in attaining this objective as follows:
5. Executed the Nvidia OC Scanner within MSI Afterburner to produce an OC curve. The curves are not always the same, so I executed it a few times, also at slightly different CPU TDPs to come up with the curve that resulted in the highest boost frequency. In this case, it was as indicated below.

If I look at the frequencies at the concerned voltages, then it is 1515@700 and 1755@812. Thus, it seems I have almost attained the target I set out for without doing much. 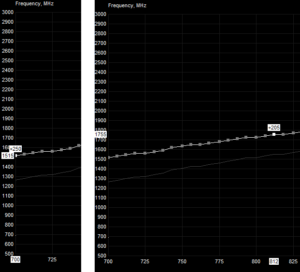 Taking a look at the HWInfo figures again with the OC curve, it can be seen now that the sustained frequency has jumped to 1725 MHz from 1560 Mhz which is a decent OC. Also, the peak frequency now is at 2040 MHz which is an even bigger leap but it comes at a much higher voltage (1006 mV). The effect of this however is that the GPU is now hitting all the performance limits apart from the thermal one.
Almost there, but “almost” is not good enough, so I had to push it a bit further. 6. At this point, I decided to try to move the curve to the left, in effect overclocking the OC curve even further to see how much more performance can be extracted from it. I started by essentially shifting the curve to the left by 25 mV but as soon after I started encountering artifacts within the game indicating that I had pushed it a bit too far. As a result, I shifted the curve by 12.5 mV instead and found it to be perfectly stable.
The other change I did was to flatten the curve at the half-way mark of the complete voltage range which is at 975 mV. There are various reasons to do so, primary of which was that the GPU never really reaches the frequency associated with that voltage and if it does as stated in the point above, it is for a fraction of a second. Consequently, it also saves the effort of manually adjusting the curve in futility. An argument could be made that the curve can be flattened even earlier to essentially attain an undervolt but I wanted to allow the GPU to boost to its practical maximum as much as possible.
With the above, after smoothing out the double frequency jumps (15 Mhz instead of 30 Mhz for a single increment in voltage step), I was left with the curve indicated below.

Firstly, we are back to only hitting the power and utilisation limit. The sustained in-game frequency is now 1755 Mhz, a further 30 Mhz boost from the default OC Scanner curve. The peak frequency is now 1965 Mhz though as against 2040 MHz earlier, but as I mentioned previously, it is transient and if you look at the average GPU power, it has come down to 69.4W compared to 70.3W for the OC scanner curve and 71.3W for the default curve. Amusingly, the maximum power consumption was over 97W with the stock curve and I also observed it breaching the 100W barrier in an intermediate test. May be it is due to some quirk in HWInfo or otherwise, the card is indeed capable of going over its locked TDP of 90W in some cases, though without much benefit.
7. With the GPU OC sorted, next, I wanted to see if I can push the CPU a bit more in co-ordination with this curve. You will have to take my word for it, but I tried increments and decrements for all the TDP values while keeping the temperature limit at 85 degrees Celsius and I finally found the best performance at Normal/Long/Short TDP of 25/40/50 respectively. 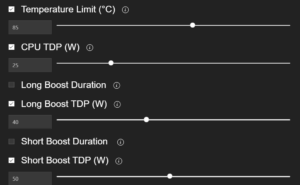 The proof, of course, is in the pudding. Thus, I present to you now, the comparison between the stock performance and after the CPU/GPU tweak. The duration of the HWInfo figures spanned from the launch of the Time Spy test to the calculation of the score.
Stock: A good jump and also a slightly higher score than the tweak in my last article (6703). What it doesn’t indicate though is that the power consumption is lower than last time.

8. One last thing! I didn’t at any point mention anything about the GPU memory overclock because I kept it for the last. After trying out different increments, I settled for a boost of 500 MHz as it was stable and didn’t lead to any noticeable increment in power consumption and thermals. With that, here is the final result. 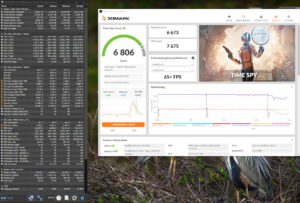 To put things in perspective then, this is how the tweak stacks up against the stock setting.