It has certainly been a slow burn in terms of incrementally extracting more performance from the laptop. If you have been with me, then you might have read the previous three installments dealing with various changes made through software in pursuit of performance.

However, when push comes to shove, there is only one way to extract more and that is to make changes at the hardware level. I had refrained from doing so until now in light of the fact that I have a 3-year warranty on the laptop and did not want to void it. Having opened it up, I am not sure the warranty is void as the laptop only contains a tamper-proof sticker on one of the heatsink screws with a warning symbol, as against a “warranty void” message. In any case, it seems to have been worth it.

The intention was to further assist with heat dissipation and in doing so, possibly extract more performance from the laptop or to make it run cooler. One way of doing so is to install additional heatsinks. I was expecting to find them locally but unfortunately all I came across were cheap aluminium ones meant for the Raspberry Pi. Thus, it came down to importing copper ones from China and while I wasn’t expecting much, their price was the same as the aluminium ones available locally. There was not much to lose in trying them out and surprisingly, they turned out to be as expected with a decent heft to them and adhesive pads that seem to be thermally conductive.

In case the article’s main image did not make it clear, here is it again depicting how I installed the set of 8 relatively tiny heatsinks. The laptop has a common copper heatsink running across the board which does a respectable job for its size. However, the intention was to increase the surface area over the CPU and GPU to better aid with heat dissipation and as you can see, the GPU won over the CPU in terms of the heatsink distribution, rightly so as the GPU is running at a much higher TDP and has a larger die size.

At this point, I was still unsure on whether I should proceed with removing the tamper-proof sticker on the screw. However, I decided to screw it and unscrew the screws, hoping I didn’t get screwed when it came to claiming the warranty. The choice of thermal paste was crucial but all I was looking at was the Noctua NT-H1 or Thermal Grizzly Kyro. Eventually, I went with the H1 10g as it is more value for money and will work for a few more applications.

As you can see above, the OEM application was probably not the best and they even missed a spot. However, it wasn’t that bad either considering how I was previously able to operate the GPU at a higher TDP without thermal throttling. The application of the paste is a controversial topic, so I am not going to wade into the best approach of doing so. The H1 does not come with an applicator and the manual illustrates the use of the dot approach, so I went with it without overthinking it. For the CPU, it was a small dollop in the centre whereas in the case of the GPU I went with additional small dots at each end. Rest of the contact points with the heatsink were covered as indicated in the image above. 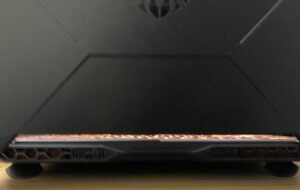 I have never been in favour of using cooling pads because most of them mess up the inflow designed by the manufacturer and thus makes things worse. It is also really difficult to find benefits from using it on a gaming laptop which already has high capacity fans and does not really benefit from having its airflow disturbed. Until now, I have been using my laptop with small retractable flaps which lifts up the bottom as indicated above and simply helps in the ingestion of air. It certainly offers better performance than the stock setup, besides being a part and parcel of the laptop.
However, while purchasing the paste, I came across the Deepcool Windpal which is a really basic cooling pad with a 140mm fan at its centre. I don’t care about the LED but I wouldn’t say it looks bad in the night. It cost only about INR 550 ($7) but it was effectively free for me as I got that much back in terms of discount for making a purchase above a specified limit. Thus, another heat-relieving accessory got added to the list.

In case you are wondering, this is how the laptop sits now when connected to my monitor. The cooling pad actually helps with the air intake by both raising the laptop at a decent angle and delivering the air close to the bottom vents. Using the laptop flaps over the cooling pad made the inflow worse and hence I decided to keep it flat on the pad, which also happens to be a very stable position.

With all these changes, I was expecting to see an immediate benefit. I ran TimeSpy each time I made one of the above changes. So, from left to right, it indicates (1) the state before making any changes (2) with heatsinks installed (3) with thermal paste applied in addition to 2 and (4) with the cooling pad. As you can see, there wasn’t a huge difference in performance but the GPU temperature did go down by more than 3 degrees Celsius. The CPU temperature was capped at 85 degrees in Ryzen Controller, so it was also good to see that in the final result, even the CPU temperature went below the limit. All in all, it indicated better thermal performance but the CPU and GPU were already operating at the limits I had set.

This led me to believe that the CPU now had the headroom to operate at a higher TDP. Thus, I stopped running Ryzen Controller and let the CPU run at its default settings with the High Performance power plan. True, enough I was immediately able to see an uplift in the overall performance. More importantly, the CPU performance improved significantly. As you can see above, the CPU score for TimeSpy crossed into 8200 for the first time whereas the CPU Profile benchmark had an all-thread score of over 6000 in comparison to a little over 5300 with my previous settings which limited the down/regular/up TDP to 25/40/50 Watt respectively. I also tried pushing up the TDP to over 60W for long boost and over 45W for short boost, but it still produced a lower performance compared to letting the CPU run on its own. Thus, out went Ryzen Controller and I had one less installed software on my laptop.

This also got me thinking whether I can also switch to using Nvidia’s built-in auto performance tuner as well. The answer, as you can see above, is NO. The GPU leaves a lot of room for improvement and thus the next step was to see whether I can push the GPU even further. This got me to go back to the profile I had set previously and try to overclock it even further. The good news, I was able to do so with a general 30-45 MHz boost at the higher voltages.

…a new high which inevitably leads to the comparison with the stock results. The efficiency is a tad lower than stock due to the higher power draw but then the GPU performance is nearly 18% higher and the CPU close to 3% better.

Finally, a comparison with the previous tweak to see if the change was worth it. A 2.5% CPU and over 1% GPU performance improvement without much of an efficiency loss is nothing to sniff at.

With this, I will close the chapter on tweaking this laptop, at least in terms of publishing articles about it. There may be scope for further minor improvements but nothing on the scale compared to each of my previous articles. It certainly has been an adventure in exploring the limits of the laptop and keeping a record of the same, but now it is just down to making the most of it until a time comes when I have to part company with it, hopefully not any time soon.